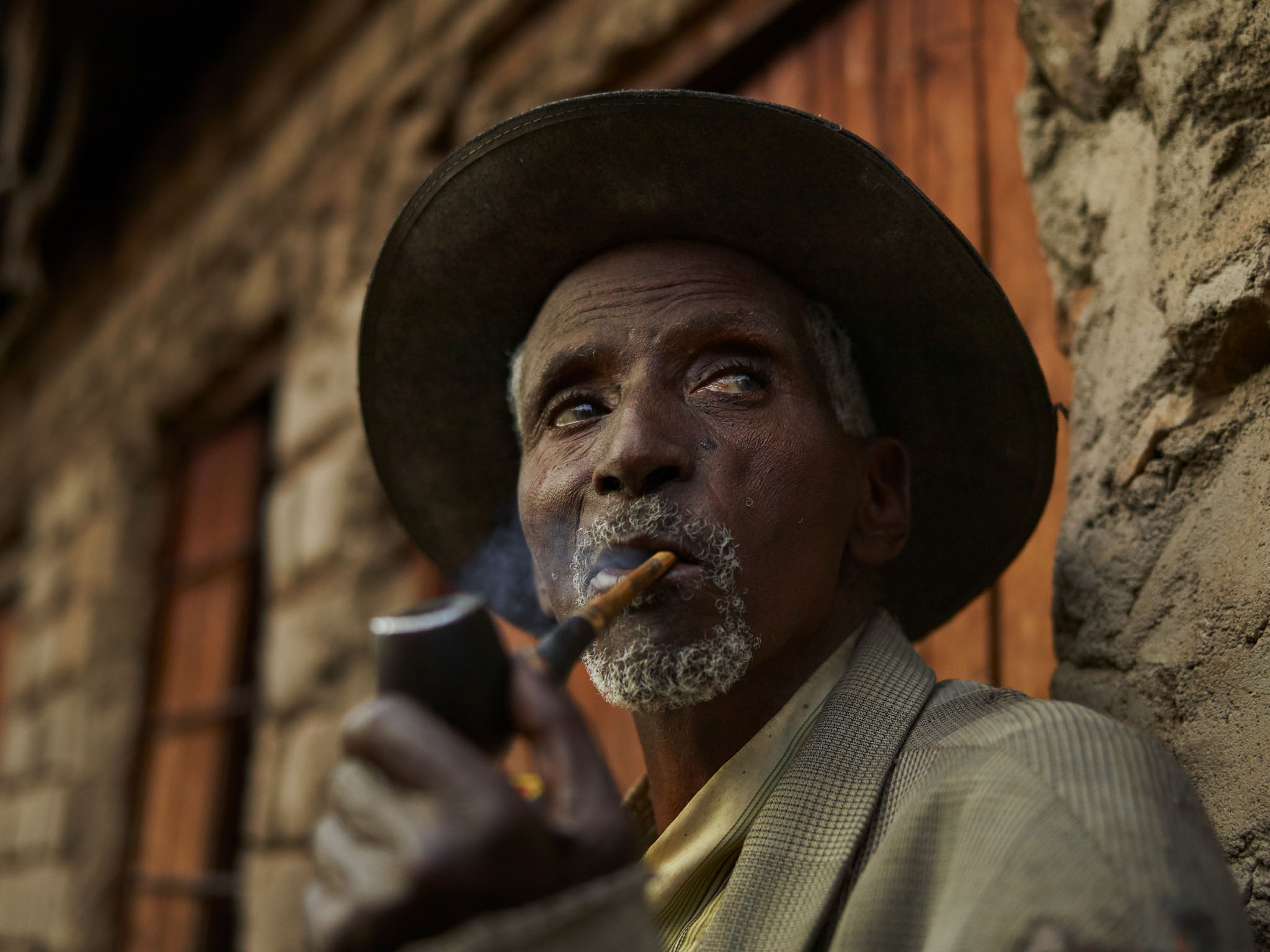 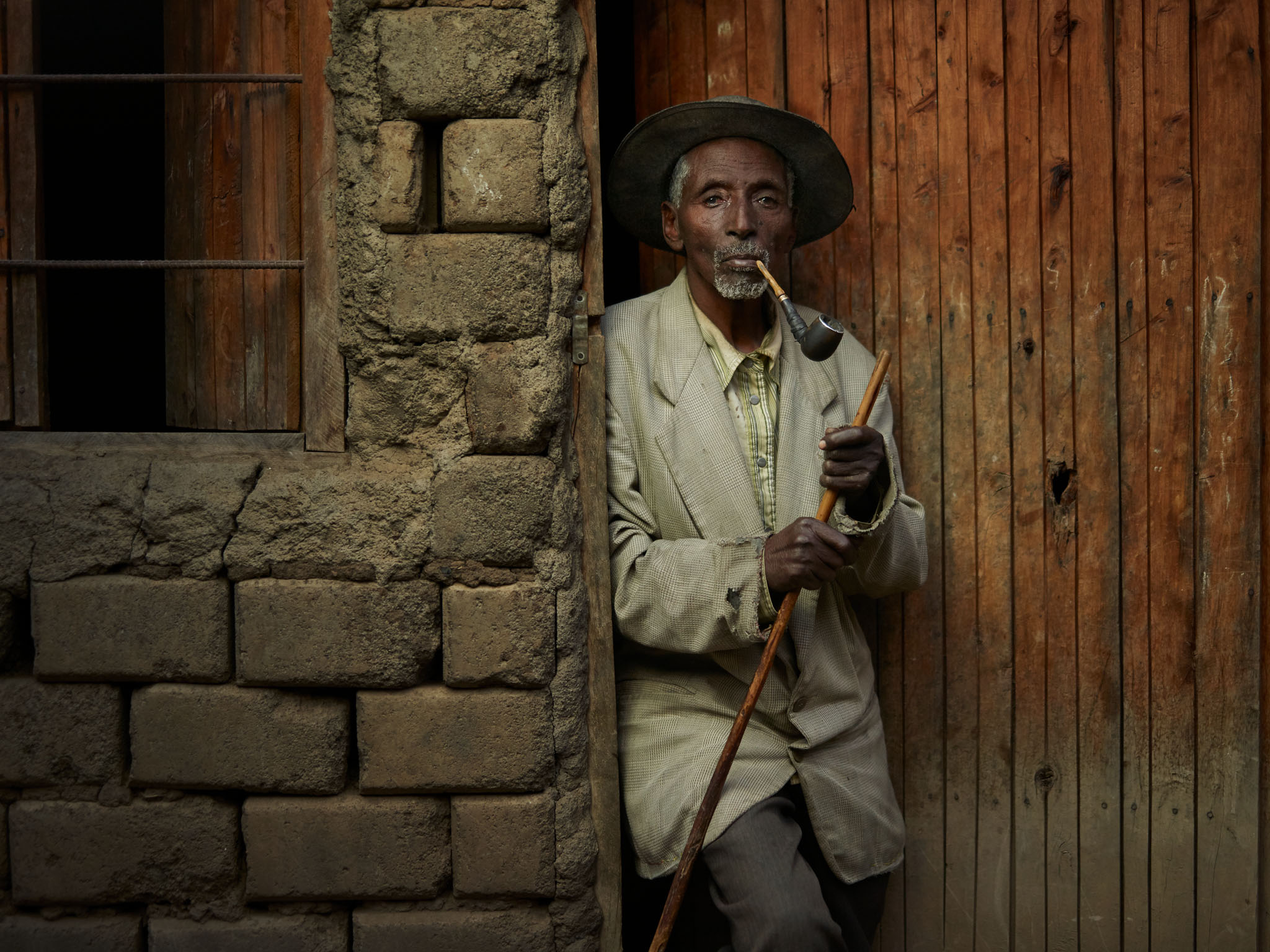 RWANDA: We’re lost somewhere in the land of one thousand hills. Our SUV curves along the cliffside. We pass the occasional motorbike— mostly people are on foot and even they are few. A deep red clay is caked into every tire. We stop in one village where our local fixer, Pierre, chats with a man playing cards. We have the name of the village we are meant to go, as well as the name of the nurse we are meant to meet. We’re directed further up the mountain. We stop again and are sent back the other way. It’s not that we are led astray, this is simply the reality of navigating the mountainside.

​​​​​​​Our careful progress allows me to get a slow motion glimpse at the passing villages. I ask Pierre to stop along the road. There is a man smoking a pipe in a doorway. It’s almost too perfect. I photograph him as the local villagers gather around. One of those villagers, a boy with a fresh haircut, knows where the clinic is. In the spirit of the local people, he offers to come with us and point the road. He climbs in the car next to me and directs us to a sharp left turn. We undoubtably missed it on several occasions. We find the health post at the very top of this dense hill top. There is another boy in a white dress shirt waiting on the clinic steps for treatment. Our friend from the village below knows this boy. He introduces us. I know already I am meant to photograph him, but we will ask later. First, we have to find the nurse, Marie Gratia, and explain to her what we are doing.  Lost is a relative term here in the rolling hills of Rwanda. Everything seems to lead us to where we are supposed to be. It’s one connection after the other that carries us through. 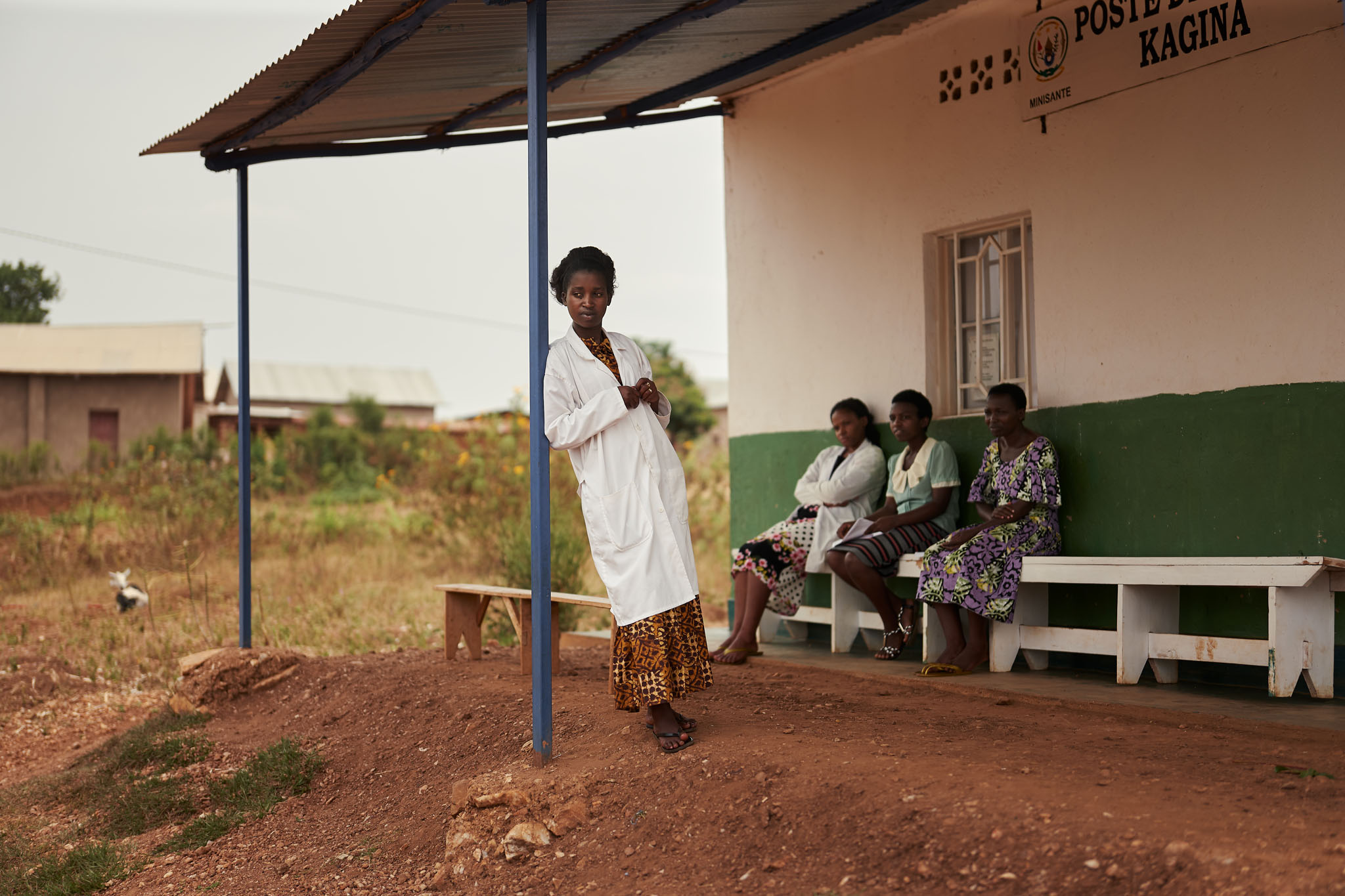 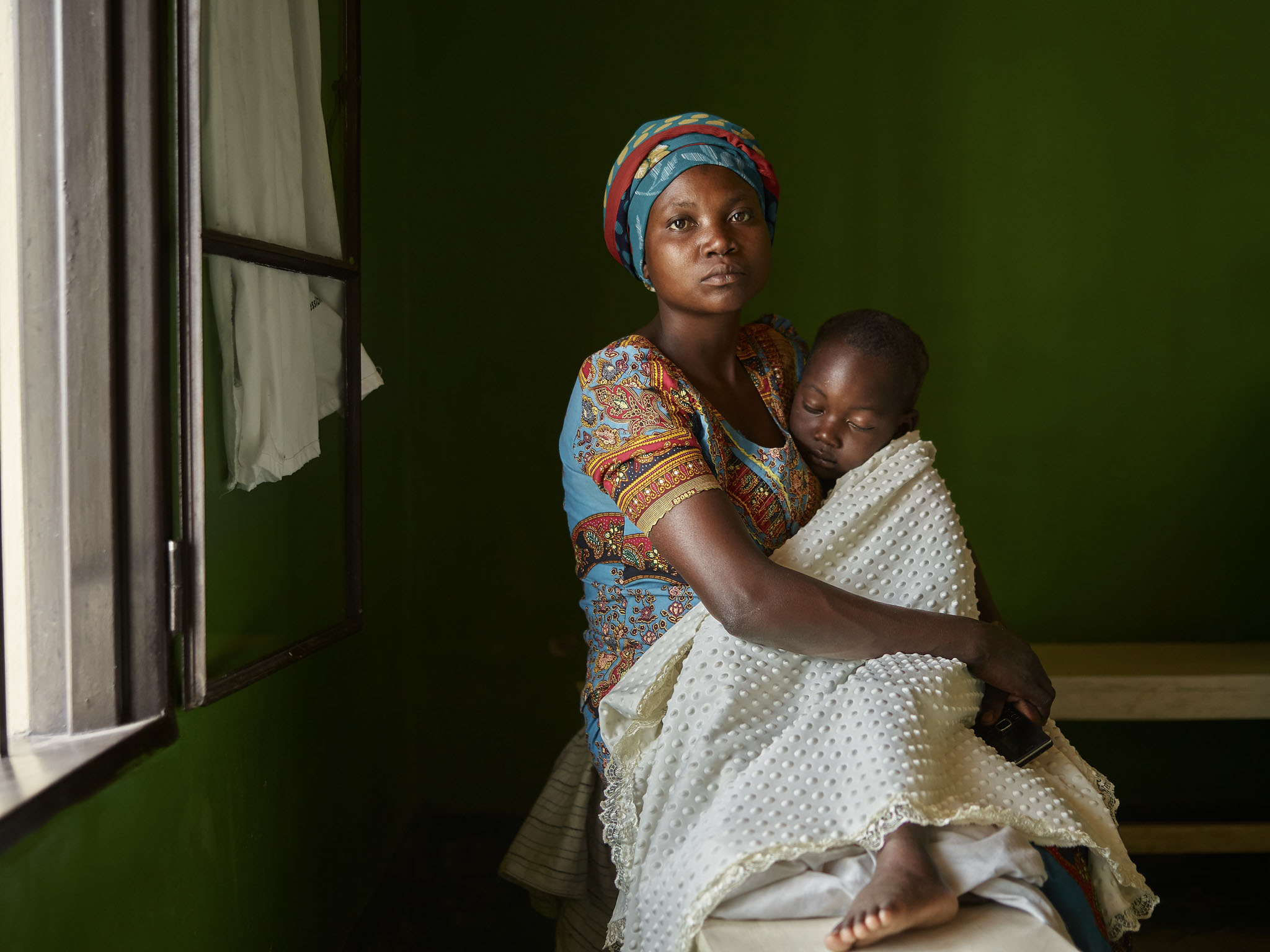 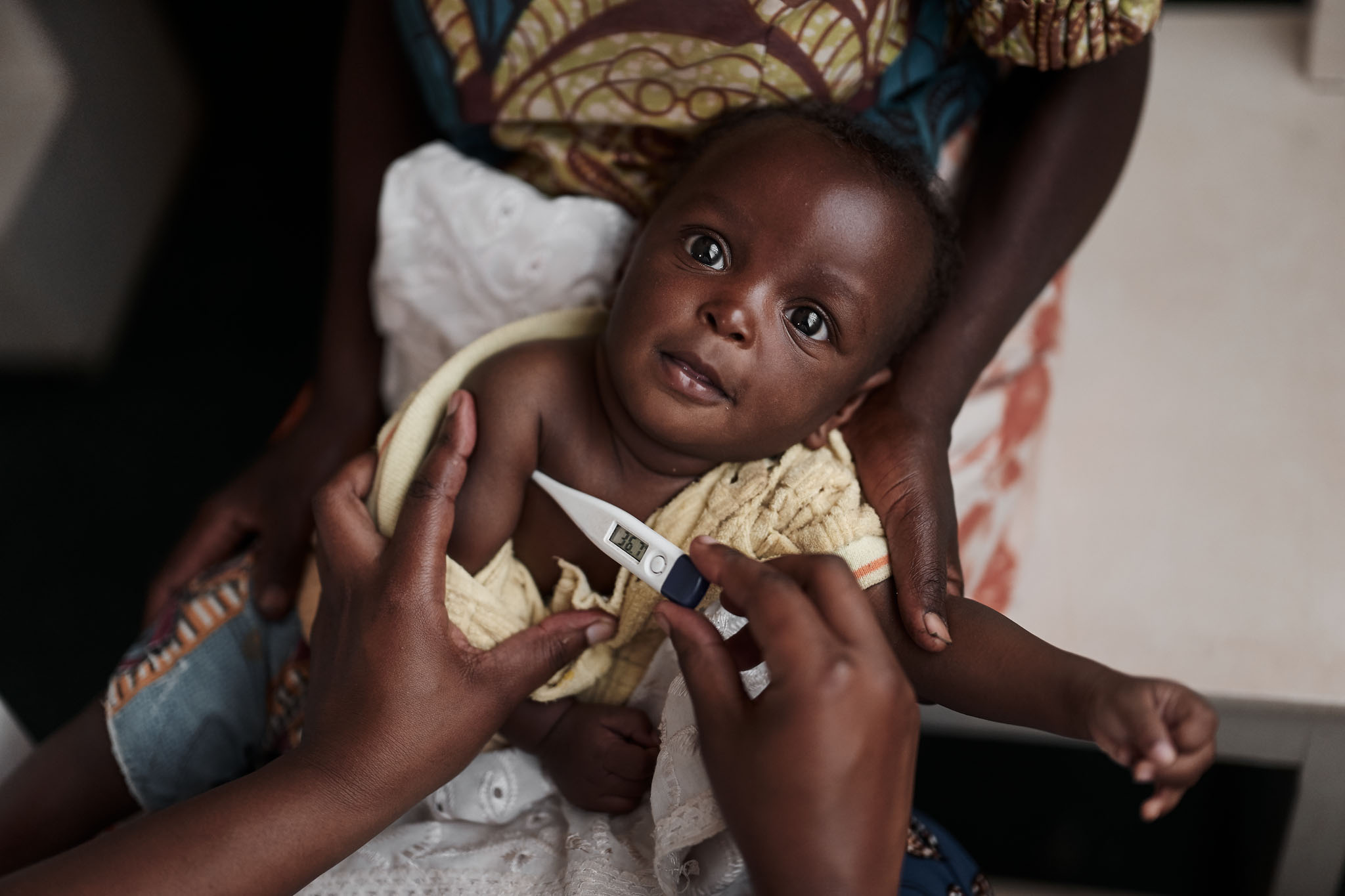 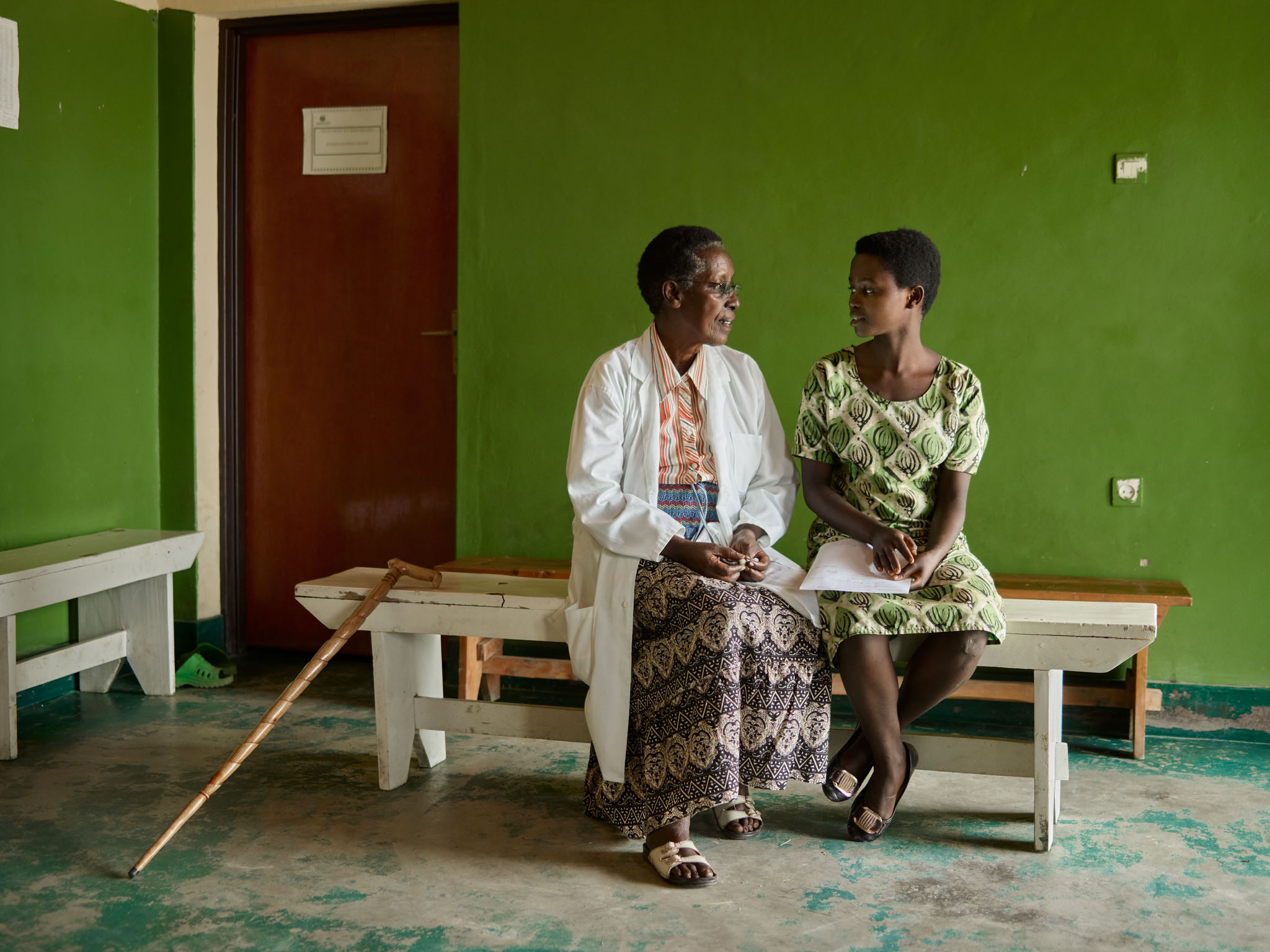 This is the third and final blog post about my project for Novartis Annual Report, which was researched and photographed with doctors, scientists and activists in seven nations around the world.

In previous years, this assignment was shot by legends of photography: Mary Ellen Mark, Giorgia Fioria, James Nachtwey, just to name a few. It was an honor to be considered among them. The project took me to places I have never set foot in before, and revealed new things in nations I have visited countless times. 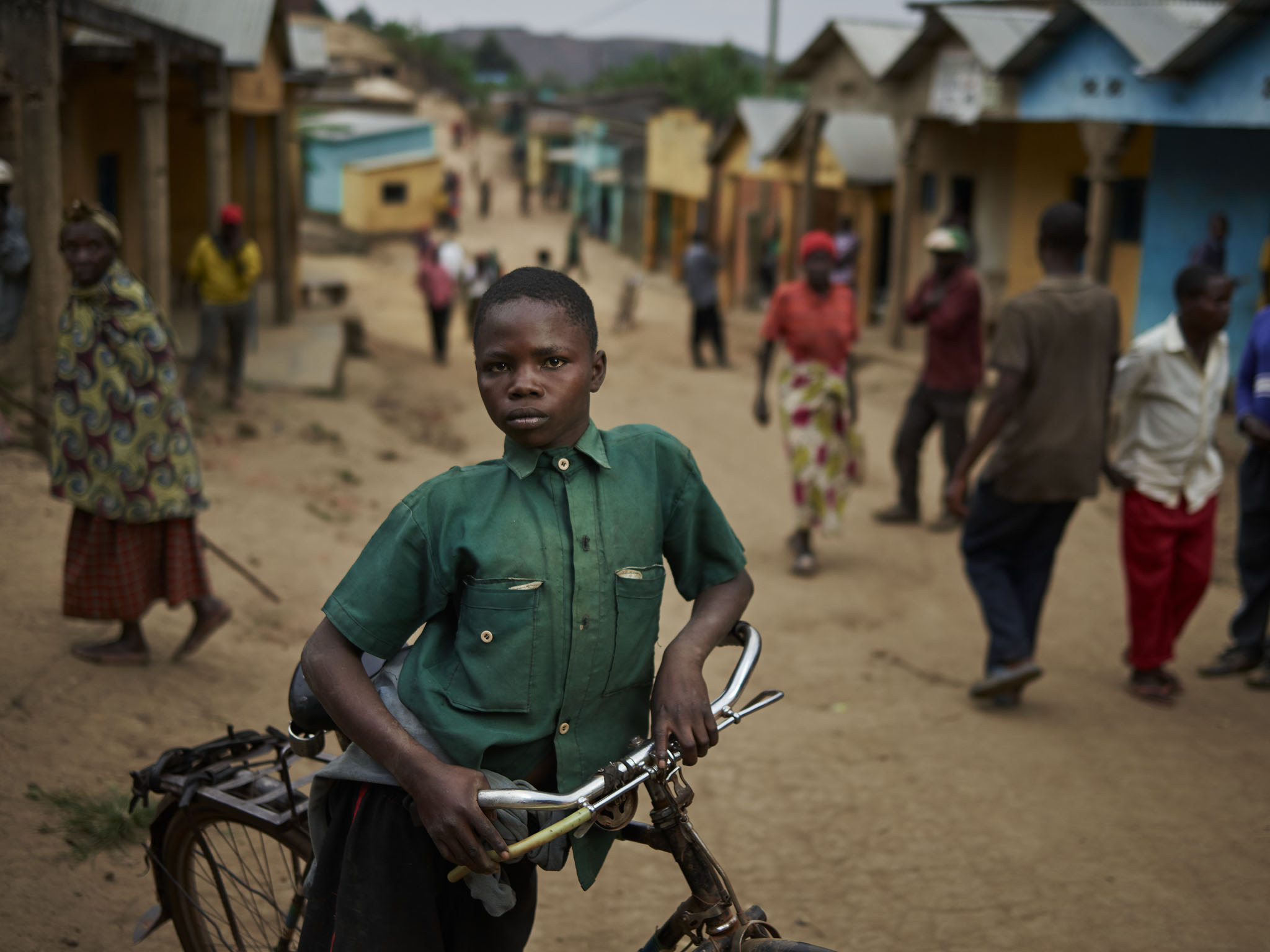 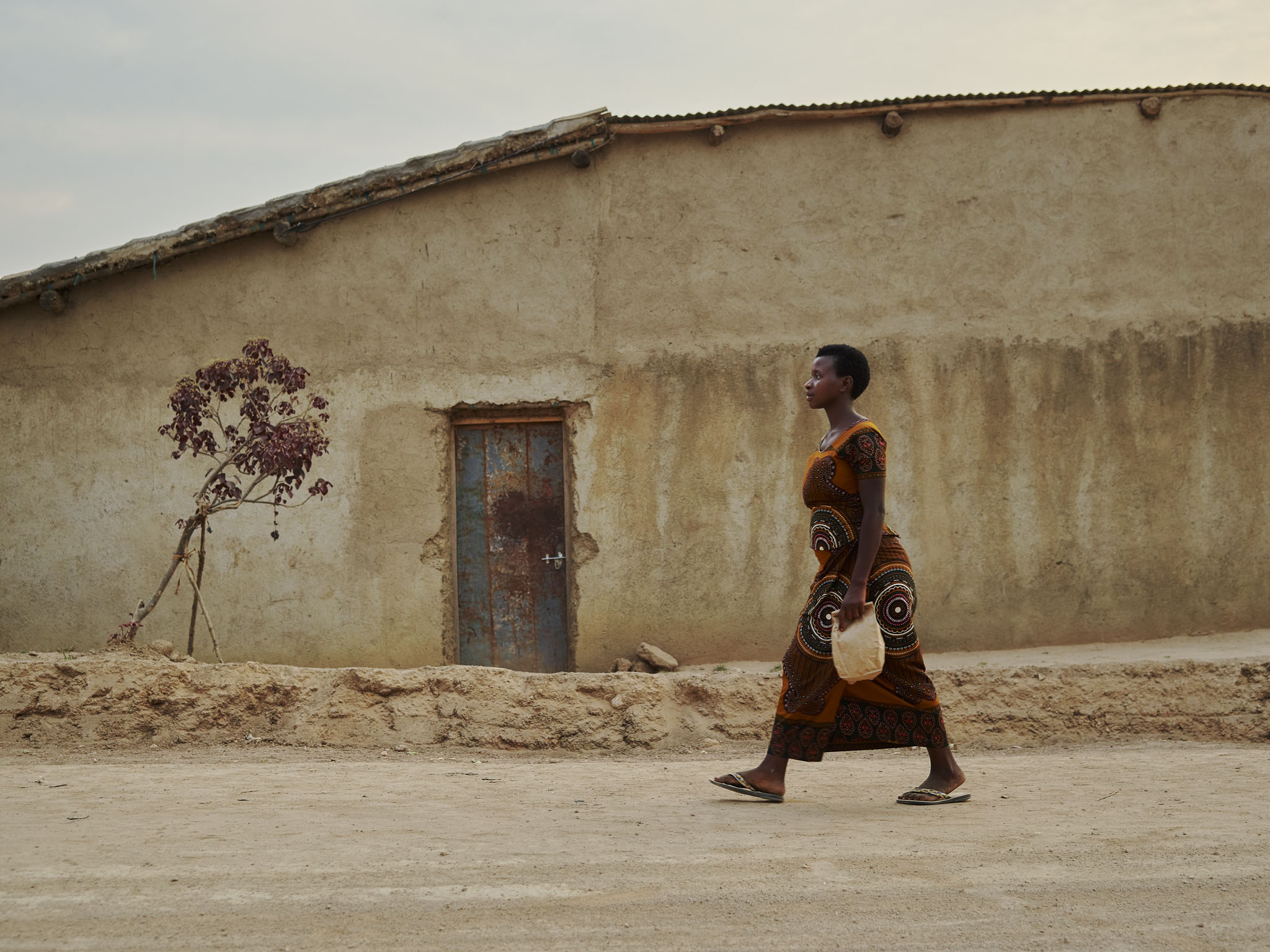 One of the last stories I photographed for this project were the nurses who are part of One Family Health in Rwanda-  a new network of health posts based in some of the most remote areas of Rwanda.

Admittedly, before seeing Rwanda for myself, everything I knew about this small, landlocked country was framed by the genocide in 1994. Only from researching past projects, I knew that Rwandan leader Paul Kagame’s fighters had an ideology similar to the Kurdish YPG, and military strategies used in this small African nation were a blueprint for many around the world. Just as the Kurds had halted a genocide of their own people in Shengal, decades earlier, Kagame’s forces had infiltrated the Ugandan Army for military training, entered Rwanda during the crisis, and successfully defeated the génocidaires. Many Kurds in Syria had studied the Rwandan tribunals against war criminals, and developed their own system to deal with the ISIS génocidaires they too had defeated. Both Kagame’s new government and the Syrian Kurds had to invent a unique system of justice to punish those guilty, but also focus on reconciliation and rehabilitation in order to have a functioning society again. So, I had characterized Rwanda only by a brutal conflict that had happened almost 25 years before. What I knew of the country was shadowed by only what I had researched about other places. I desperately needed to expand my thinking.

Before traveling, it entered my mind that perhaps I shouldn’t even ask or write about the genocide- I was sure the citizens of Rwanda no longer wanted to be defined by it. However, over my visit, I found the genocide was not a taboo subject for Rwandans. Although that tragedy had now become the past, it also became a driving force behind organizations like One Family Health. It was one of the many reasons why every Rwandan I met seemed to work so hard. There was a mentality of self-liberation and self-sustainability. What I witnessed and photographed in this small nation was a huge success story born from past trauma. 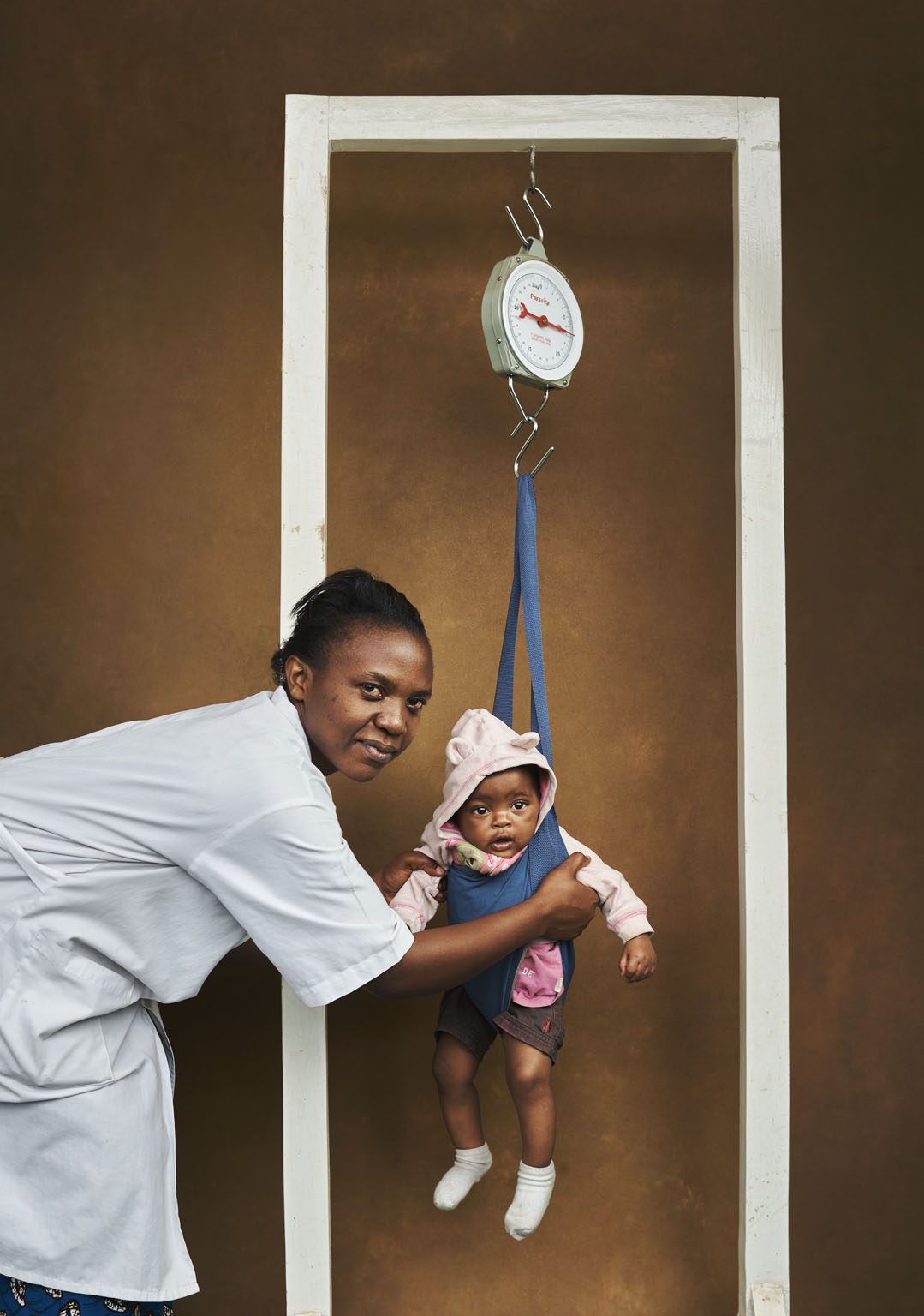 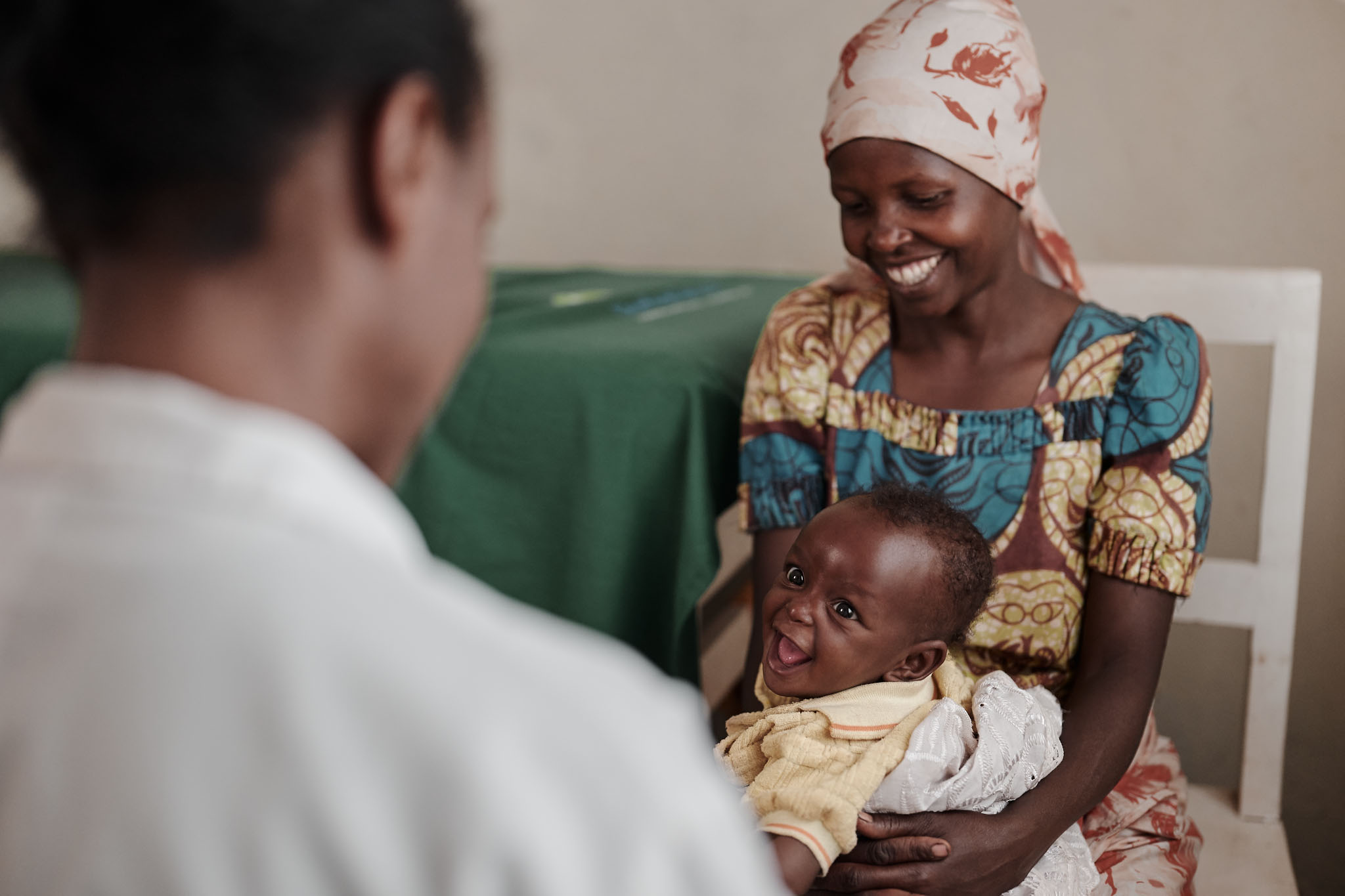 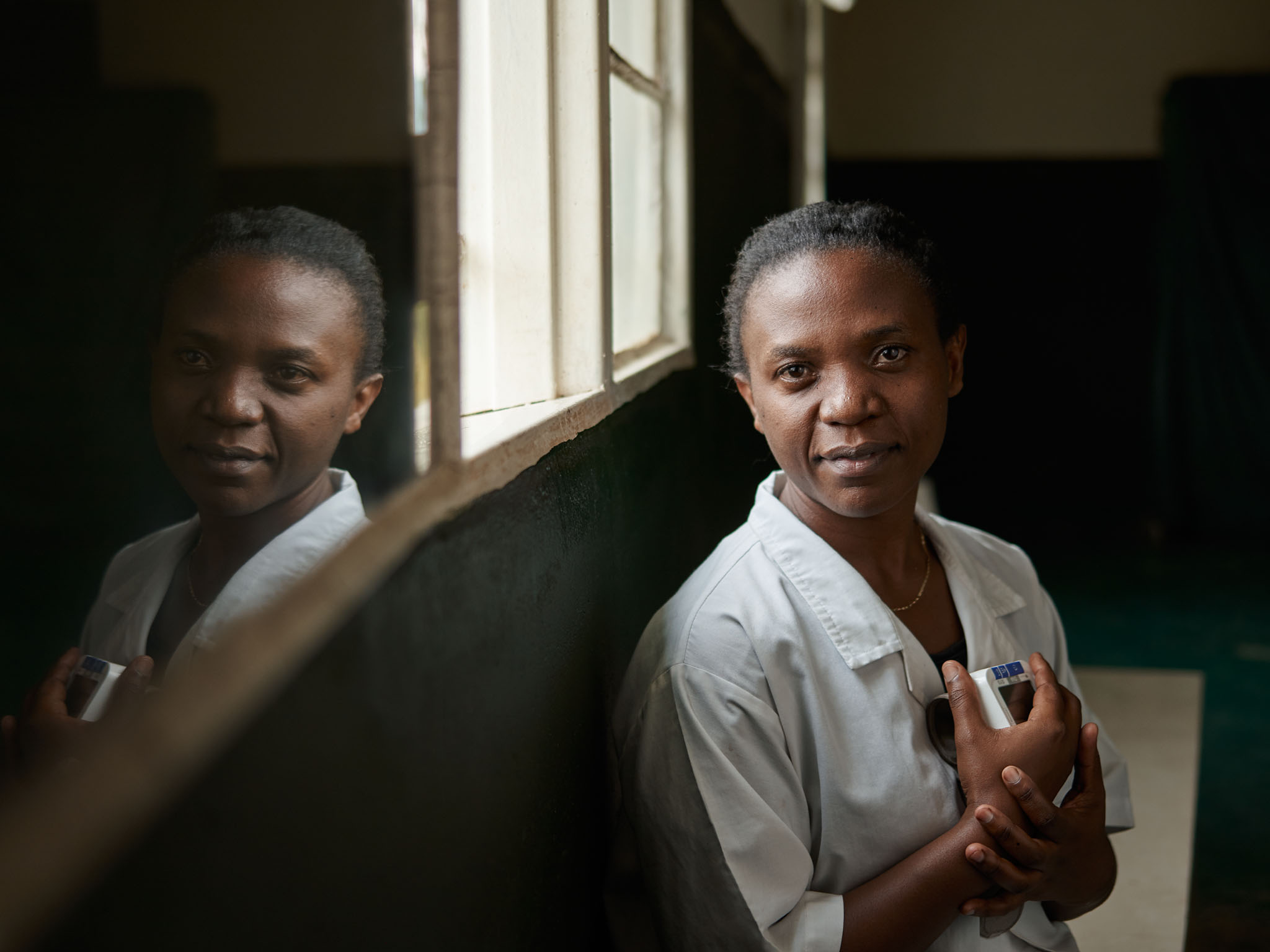 “Rwanda is a place where there is this attitude that we cannot be relying on people, on other people in the in the outside world or on donations because it's not sustainable. We are trying to create sustainable entities.” Maggie Chirwa, country director of One Family Health.

Rwanda has rebuilt itself on the idea that it cannot rely on the outside world or donations. Relying solely on NGO’s and outside forces is a short term solution to what is a lasting issue; health care and stability. On the precipice of the 25 year anniversary of the genocide, it’s clear that Rwanda has taken control of its infrastructure— becoming a model country for other African nations through self-sufficiency and community-based initiatives. 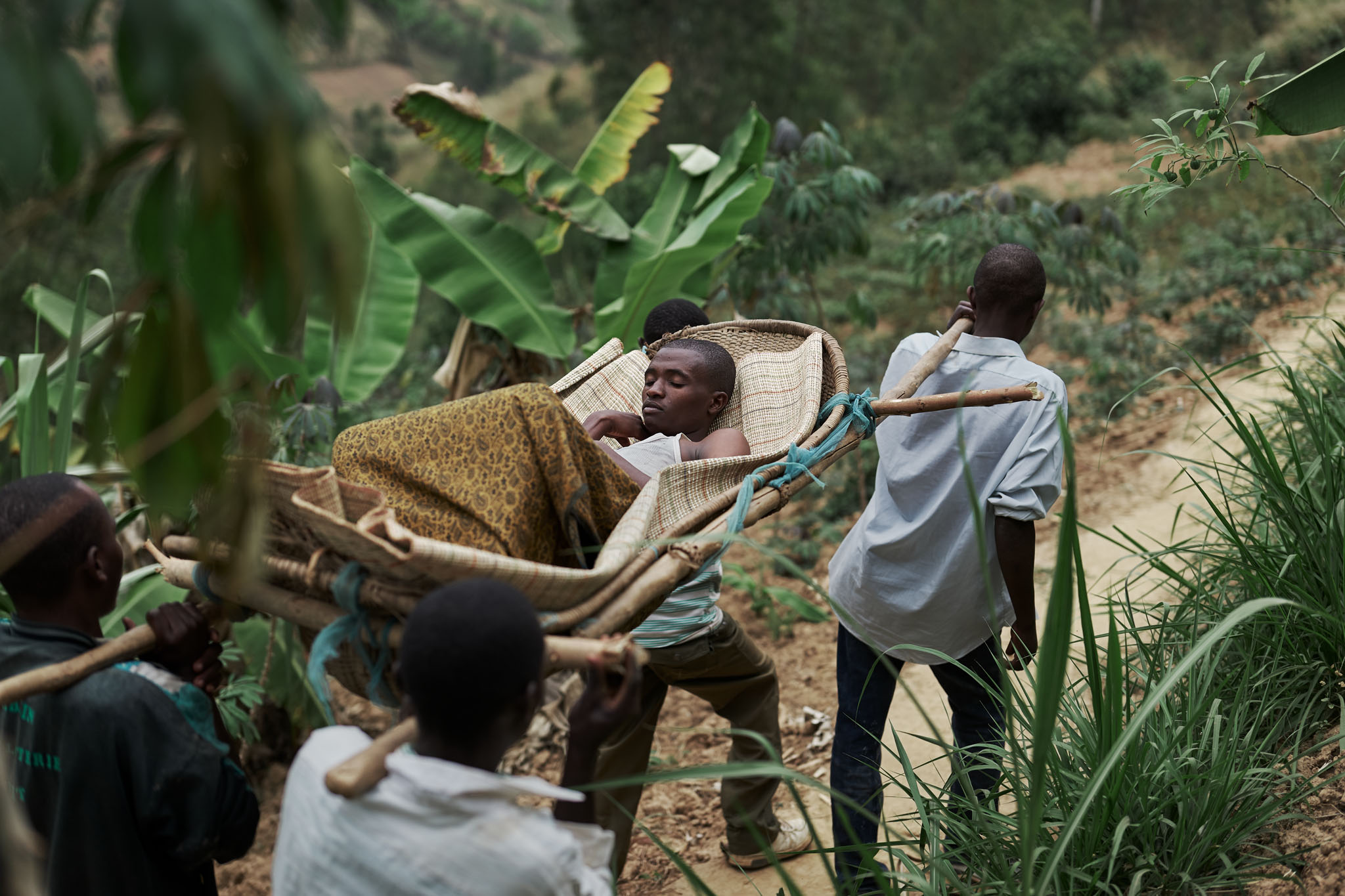 Above: This “ambulance” is unique to the north of Rwanda. Community volunteers connected to the Poste de Sante Boyange carry patients through the rugged landscape to the rural health clinic. 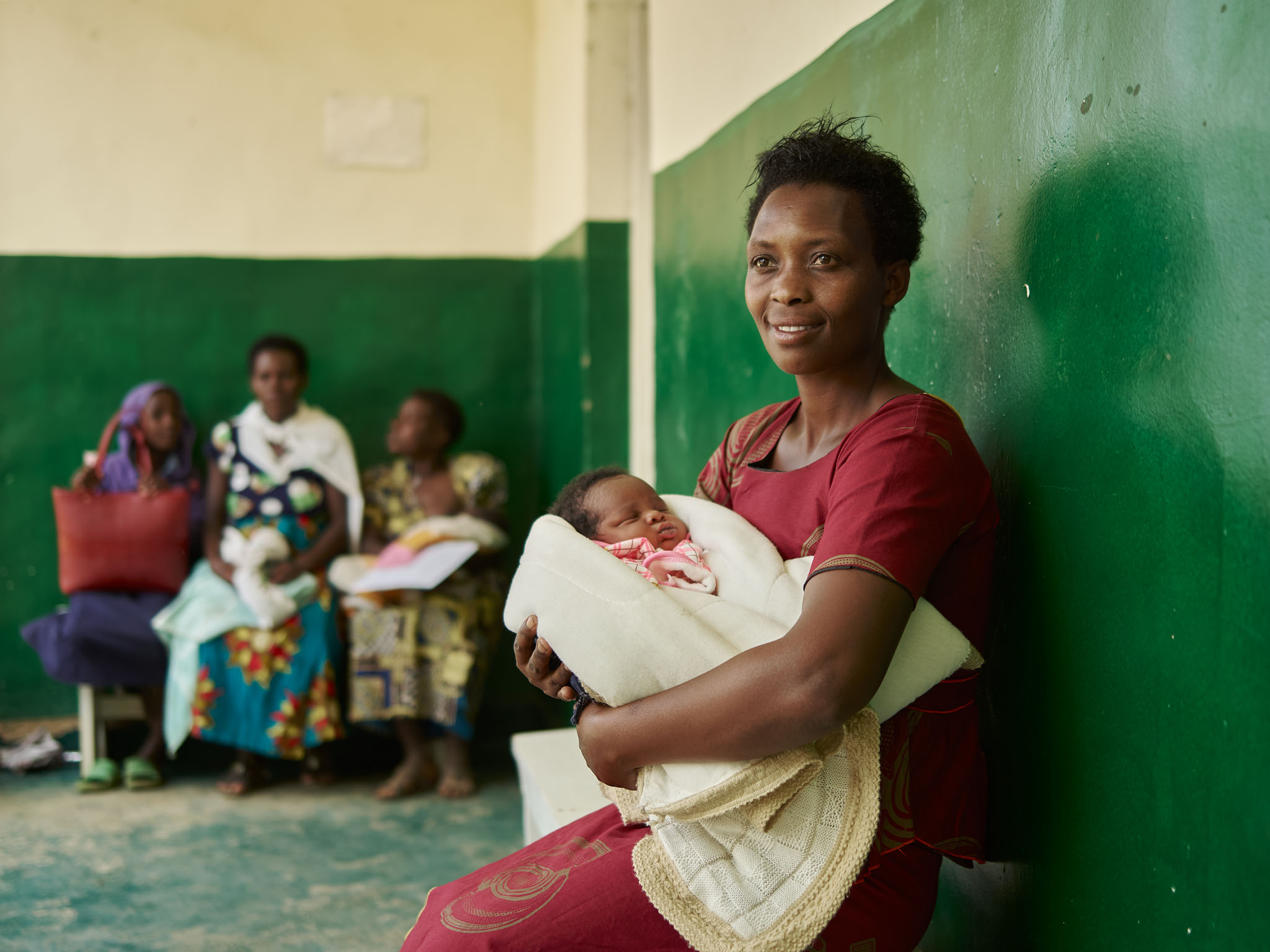 It’s easy to see the capital Kigali as a shining example of a quickly developing African city, but the countryside of Rwanda is extremely underdeveloped. Access to healthcare and vital medicines in rural areas of developing countries is often many hours’ walk away. In Rwanda, health posts have been established across the country to deliver healthcare to those in the most remotest of regions, providing the rural peoples of Rwanda a very affordable healthcare. The most common treatments are for malaria, worms and respiratory diseases. The average treatment costs roughly about one dollar and twenty cents. If the condition is too complicated for the health post, they are referred up the chain to a more specialized clinic.

These health posts are run as private clinics by local nurses, who immerse themselves within the communities, driving entrepreneurship beyond the thriving skyscrapers of Kigali. Josephine, a 30 year old nurse, had the skills to practice medicine anywhere, including the comfort of the capital. Instead, she chose to open her own health post along a dusty road in a previously overlooked community in the Southern Province. Rather than her chosen village of Kigusa be reliant on a foreign NGO, Josephine immersed herself in the community and created a self-sustaining clinic. The people have come to know her. The stability of her rooting in the community allows for the system to thrive. 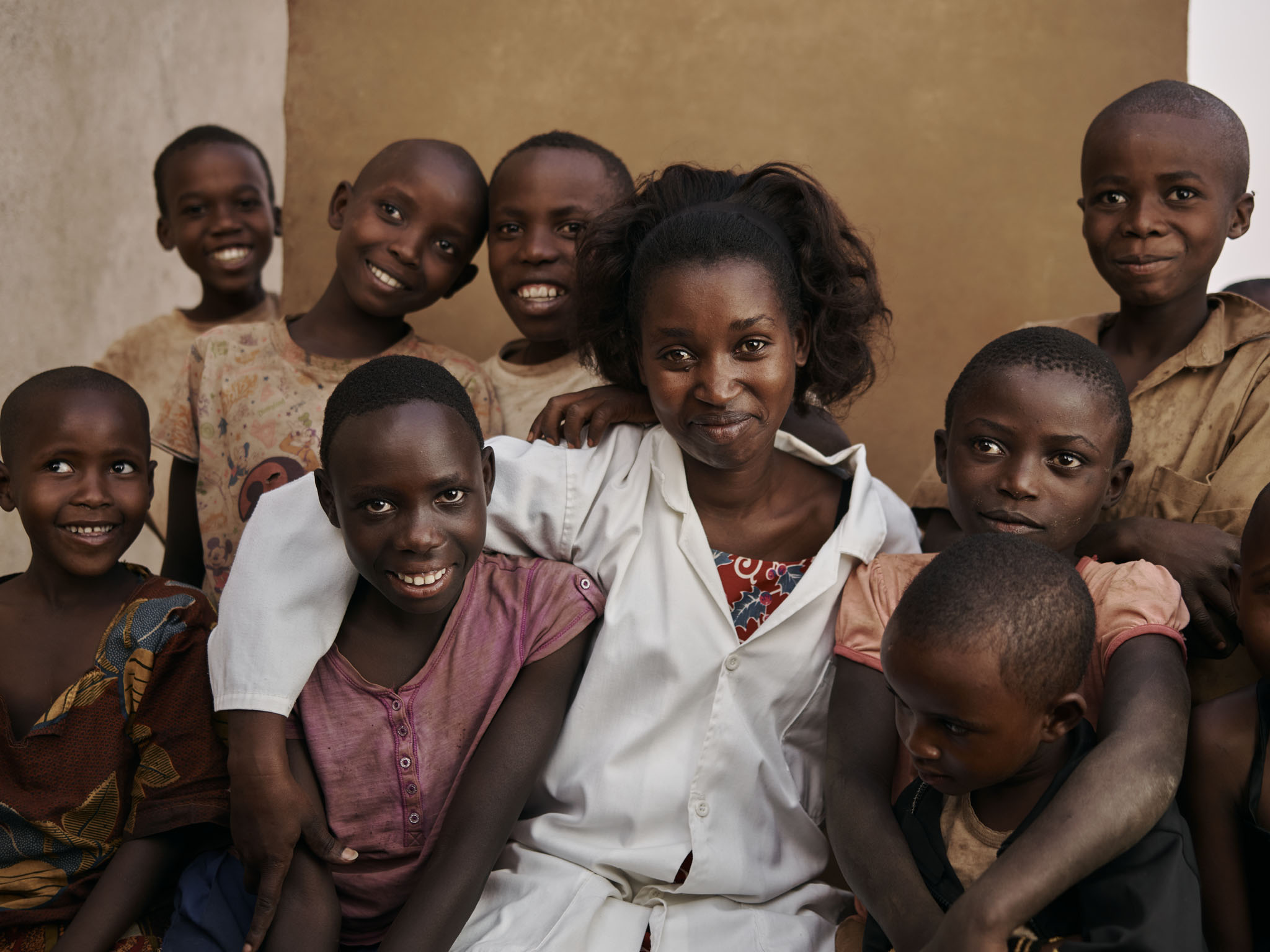 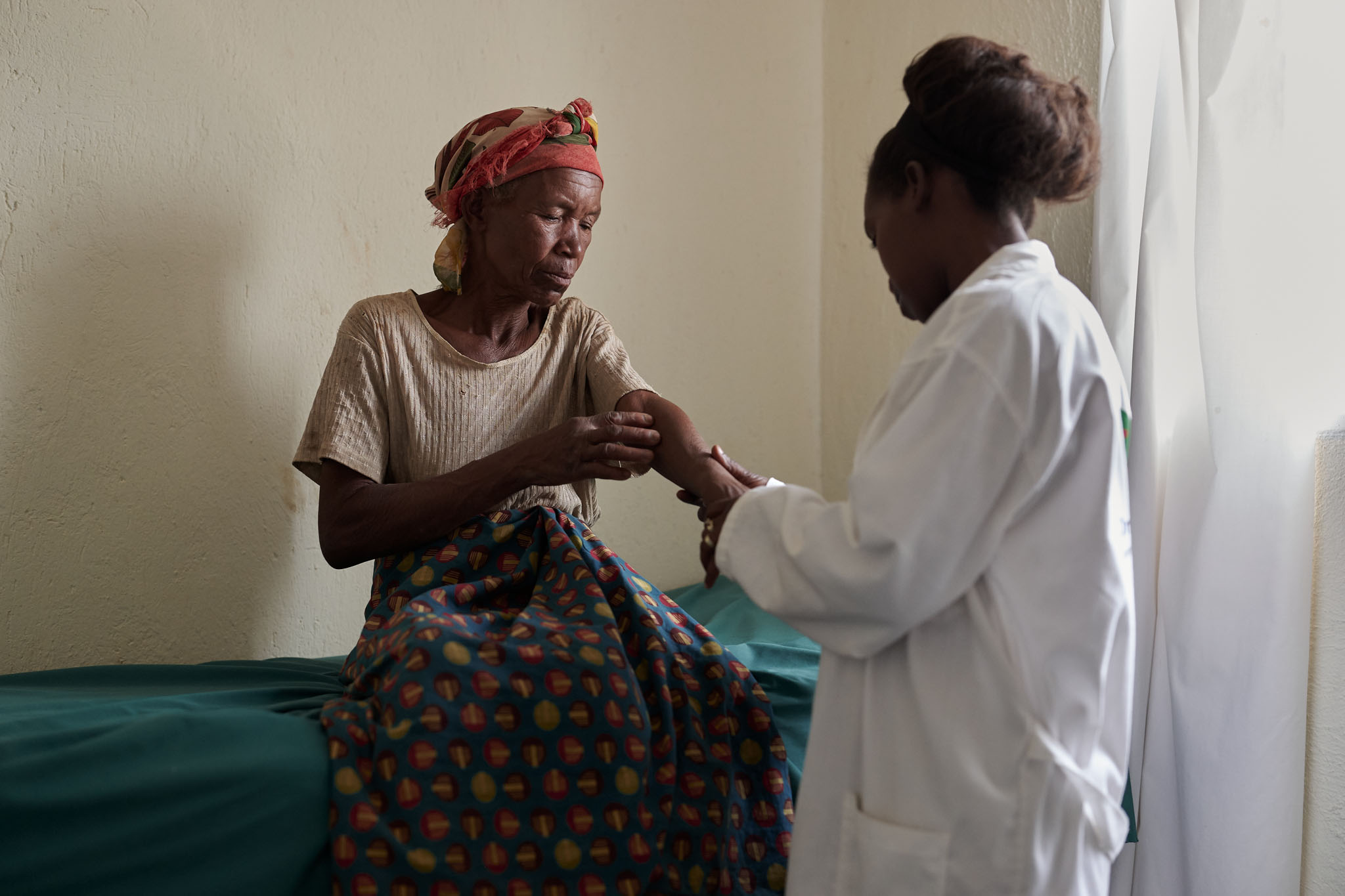 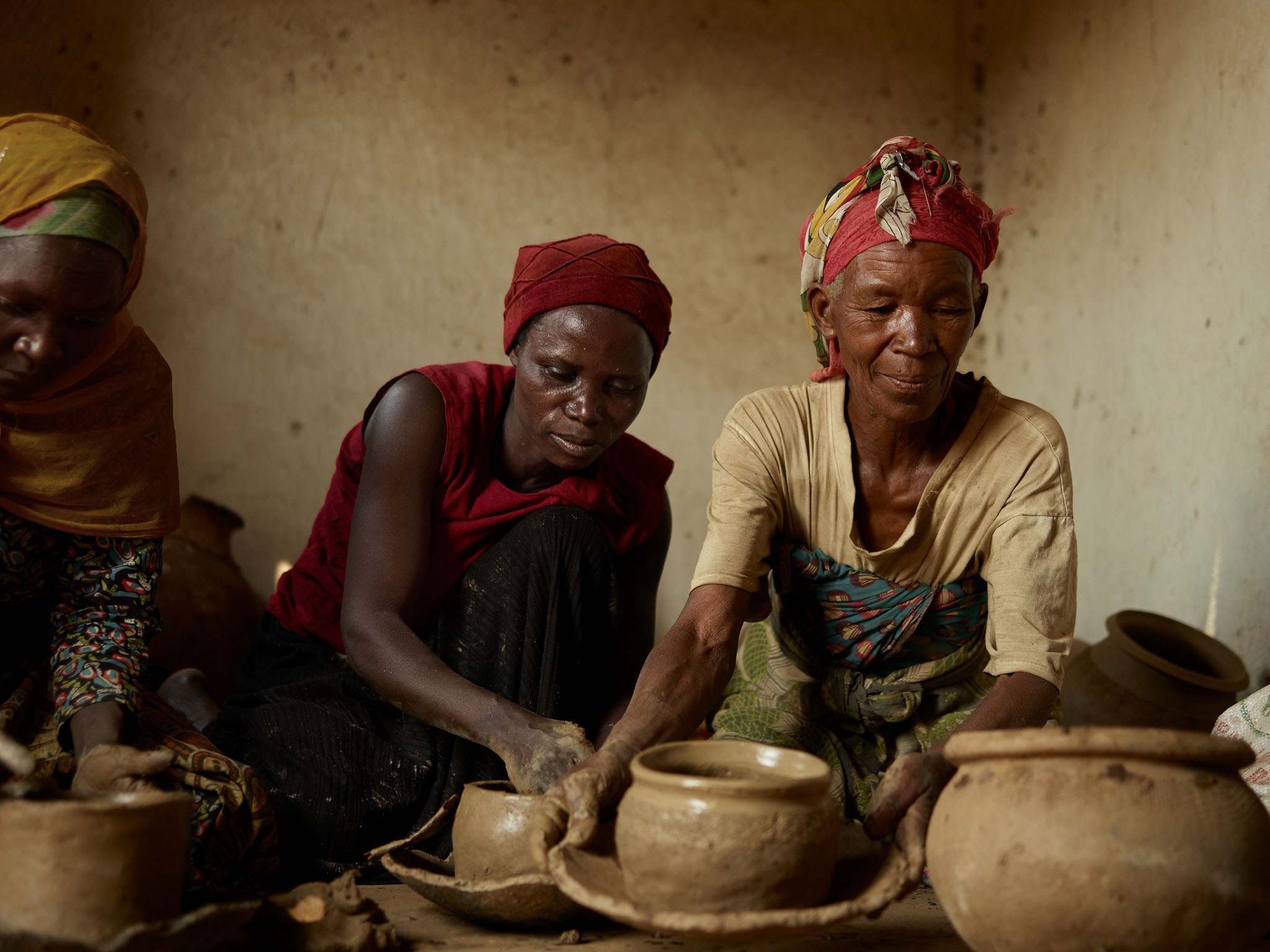 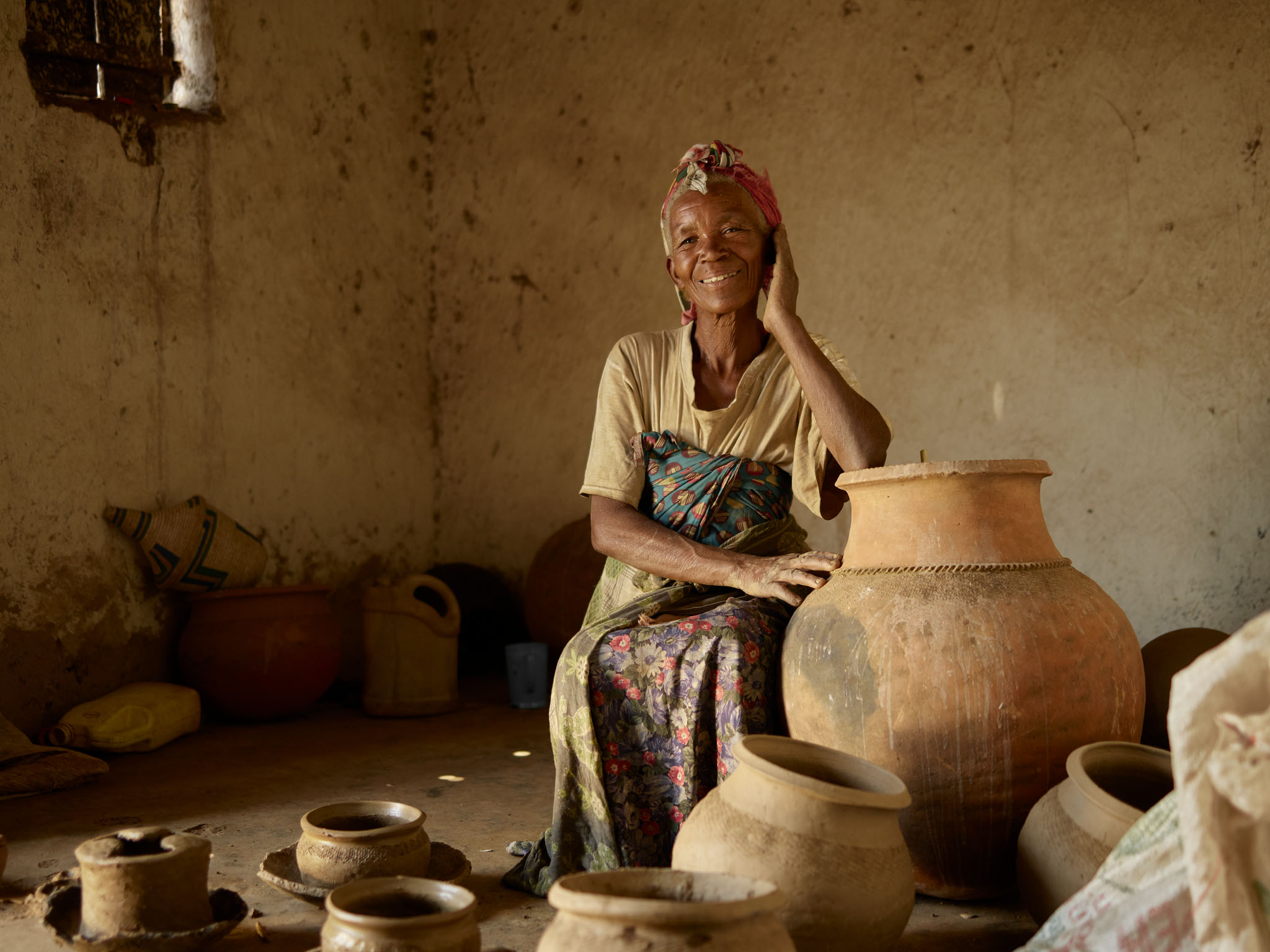 Above: Melaniya Mukamudenge, a potter living in rural Rwanda, receives treatment for malaria and other ailments at a local healthcare outpost run by nurse Josephine.

There is a nationwide electronic archive of each patient’s medical records, which can store reports received from doctors and nurses via mobile phone text messages. This data can be used to trace outbreaks and disease trains, something which was once unheard of in such remote communities. At the time of photographing, there were 110 health posts in 14 distracts, but the larger plan is to reach 500. If Rwanda is a successful prototype, the model could be extended to other African nations and beyond.

My approach as a photographer was to travel to four clinics in remote areas across the country. I would photograph four nurses: Maria, Josephine, Janviere and Valery. From there, I would receive permission to also photograph specific patients— to follow them around and visually explore their everyday lives outside of the clinic. Through this method, I discovered Josephine’s patient Melaniya was part of an all-female co-op reviving traditional Rwandan pottery. I also discovered the photogenic home of Claude— a 12 year old patient of Maria whose malaria test luckily came back with a negative result. Step by step, each day I attempted a small version of what the nurses had done, and entered myself in the community through the health post itself. 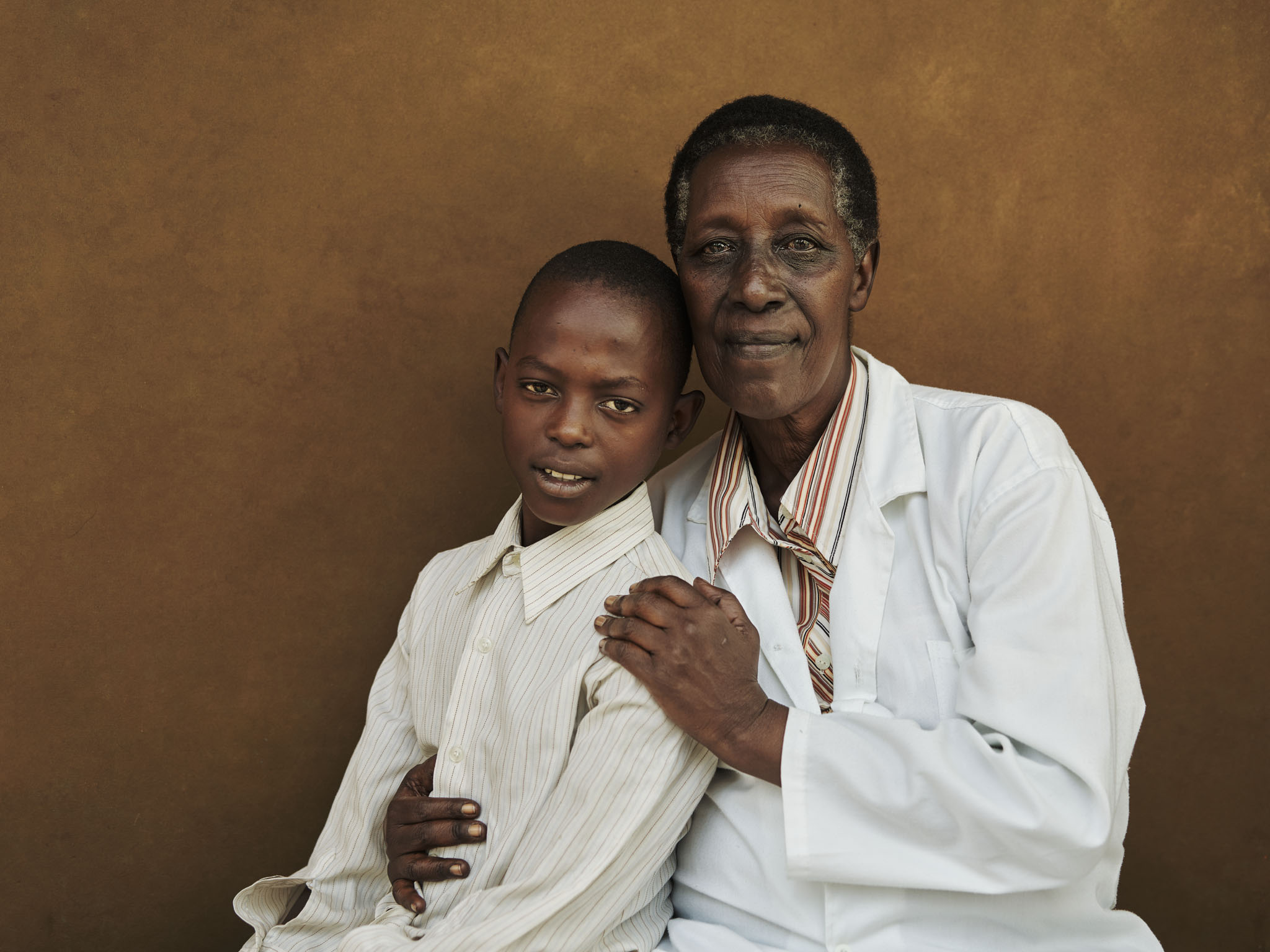 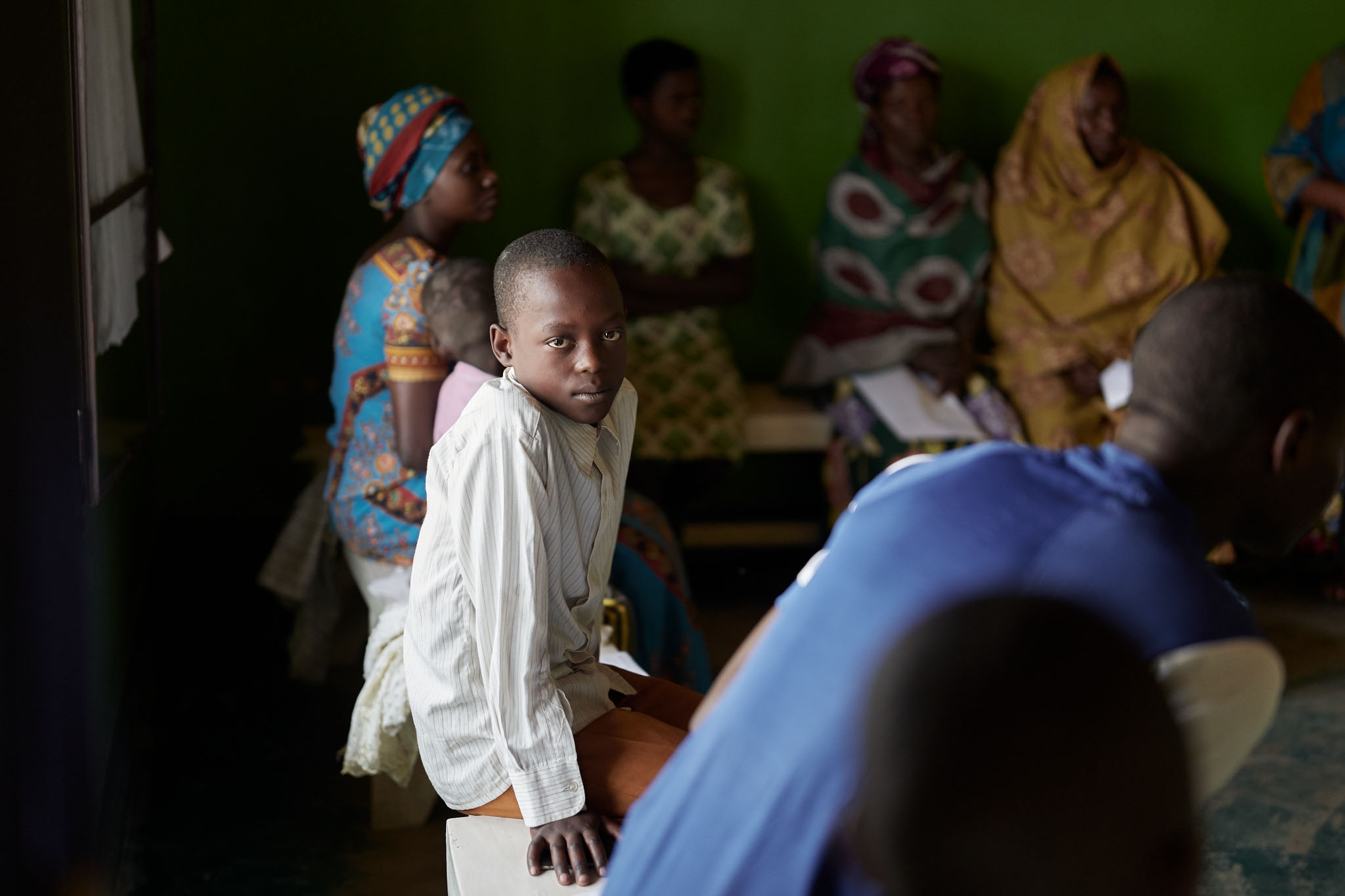 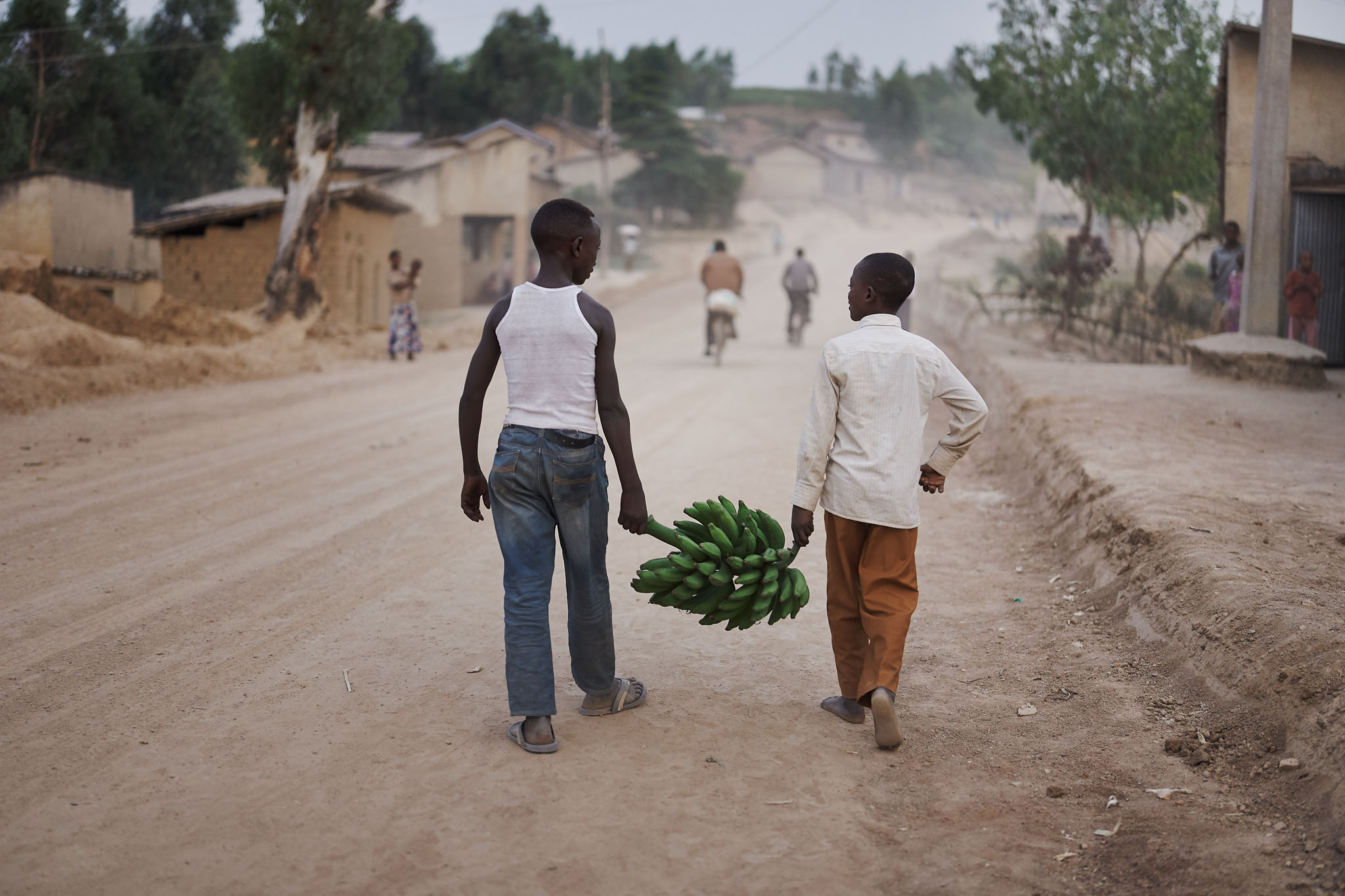 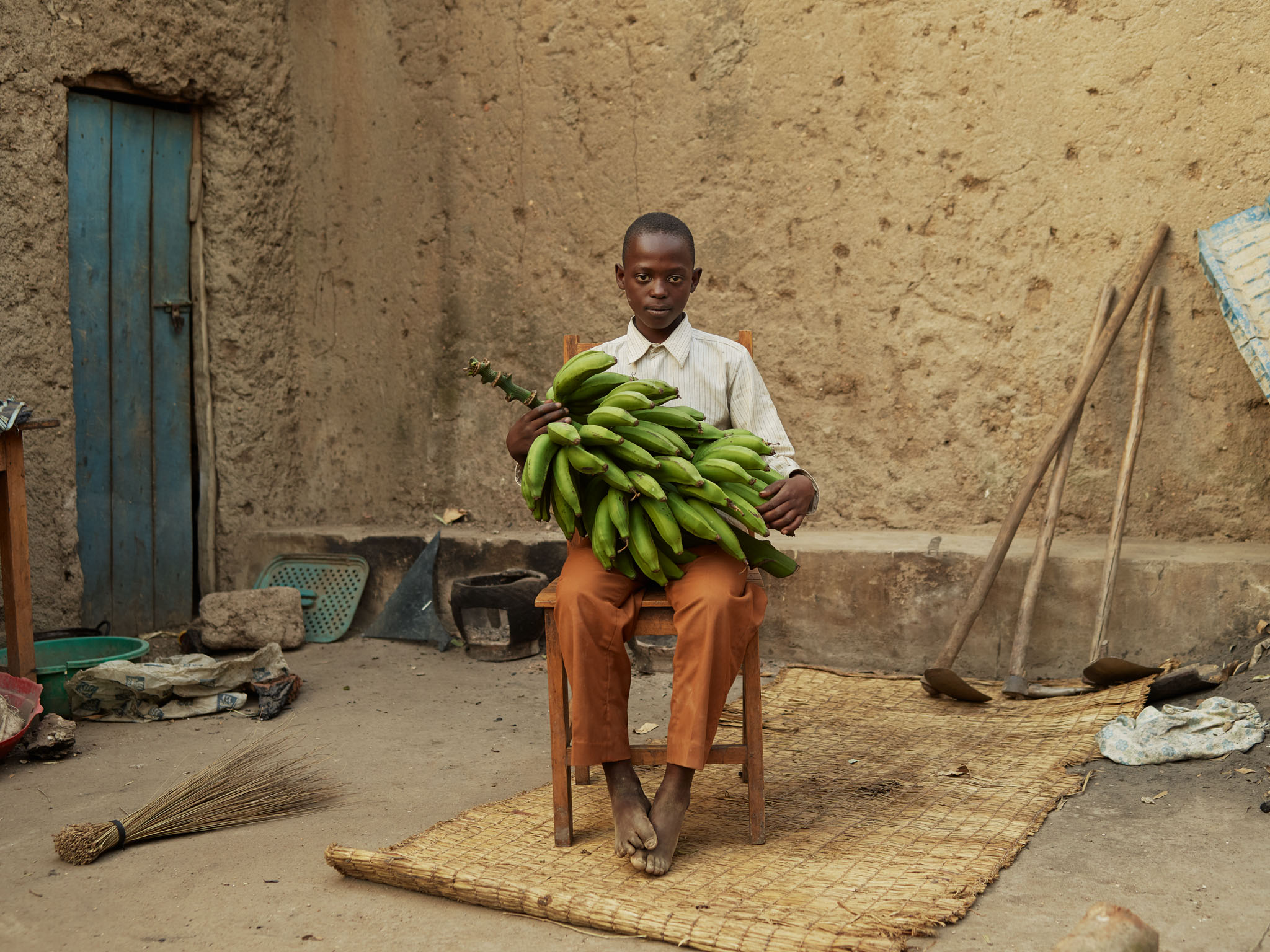 Above: Portrait of Claude Mwizerwa, 12 years old, at home holding bananas- one of the staple foods of Rwanda found in almost every meal.

USA: After Rwanda, my last stop for this assignment was to photograph innovative American scientists and doctors in Boston and Cambridge, USA. Just as in the other countries, I found a deep connection when I photographed Dr. Aj Kaykas and Dr. Florencia Segal.

Dr. Aj Kaykas is a scientist specializing in genome editing through CRISPR. At the time of the shoot, Aj led the early target discovery team in the neuroscience unit at the Novartis Institutes for BioMedical Research. 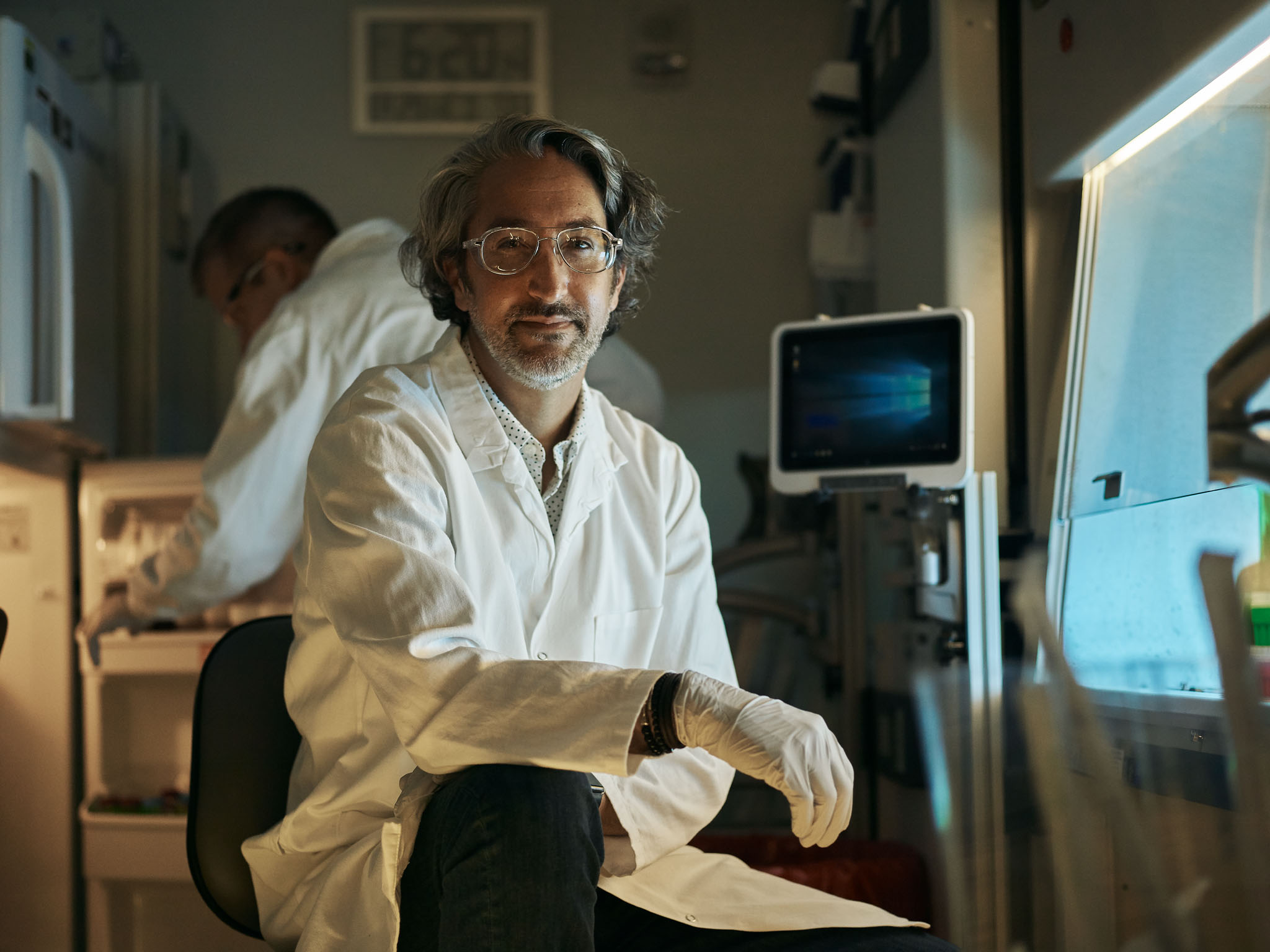 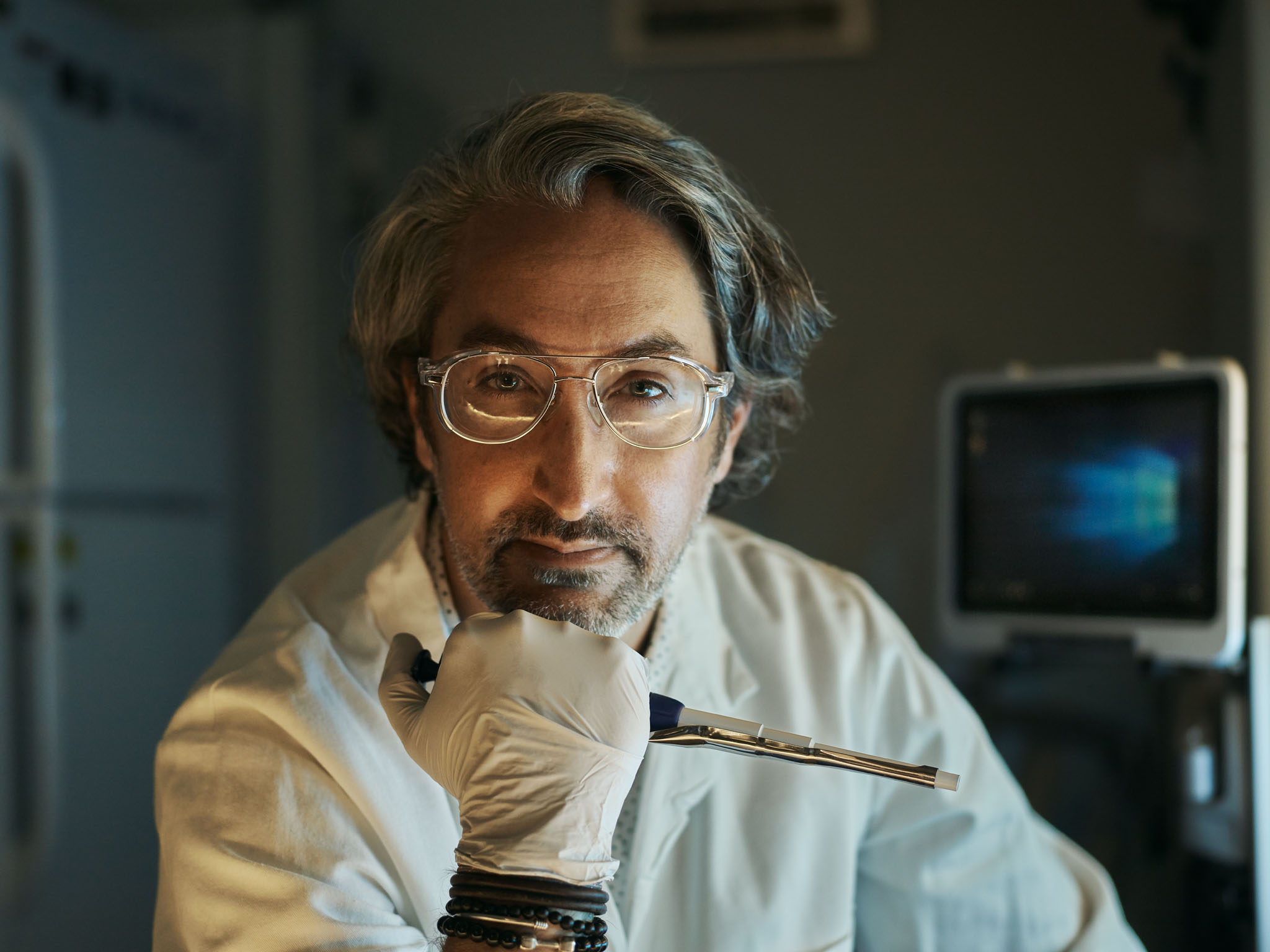 Above: Portrait of Dr. Aj Kaykas in one of his prior research labs. 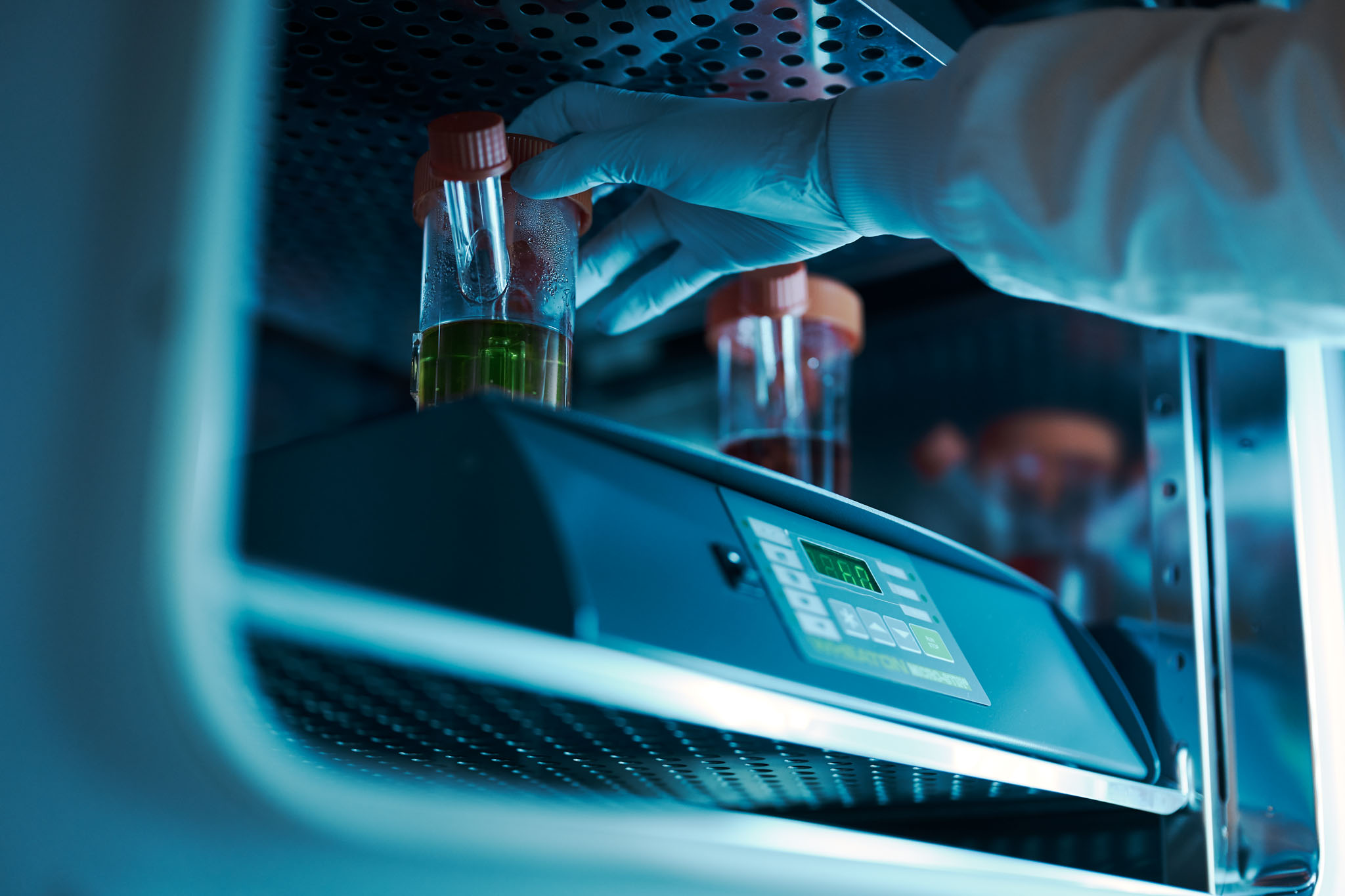 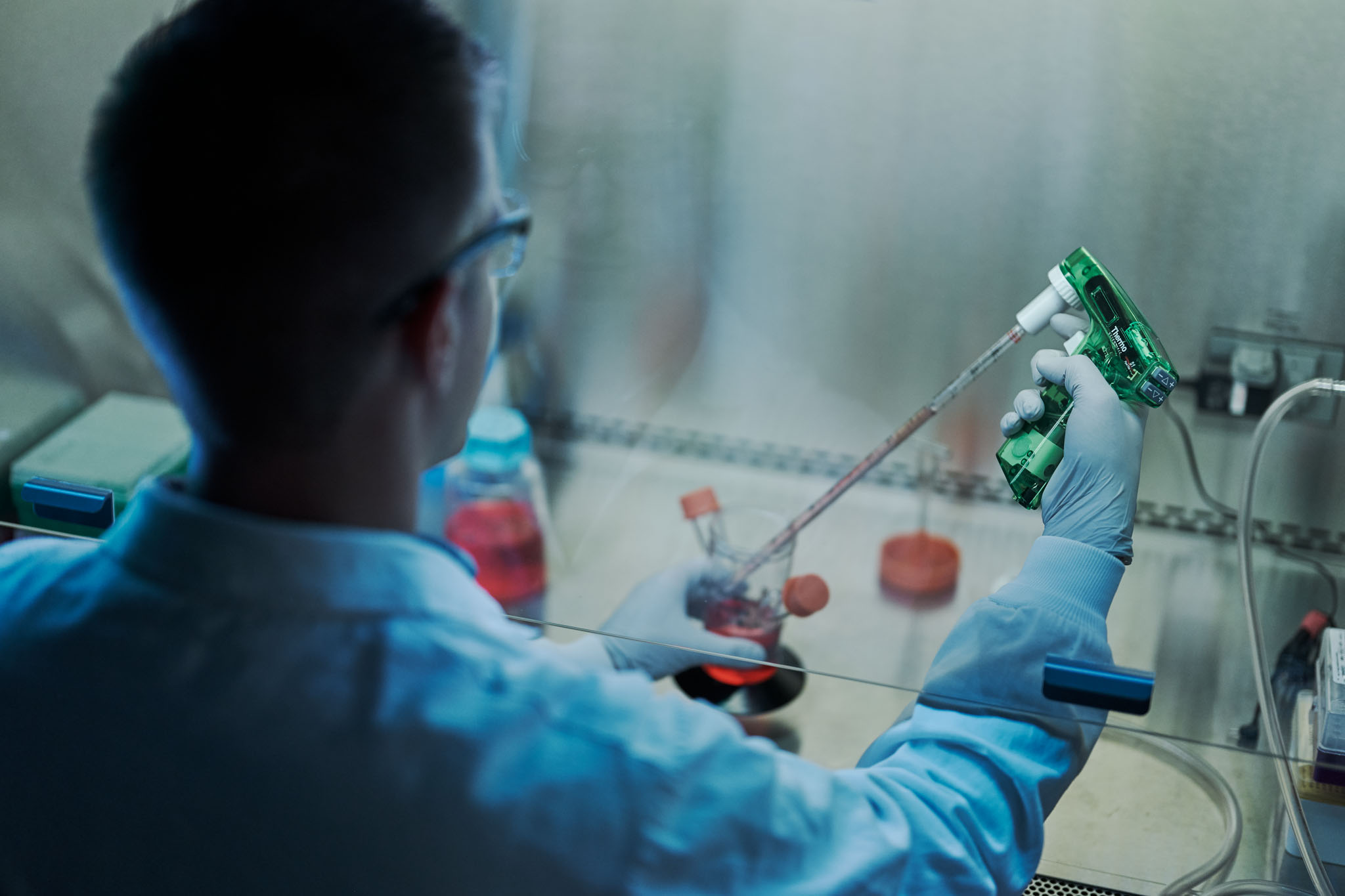 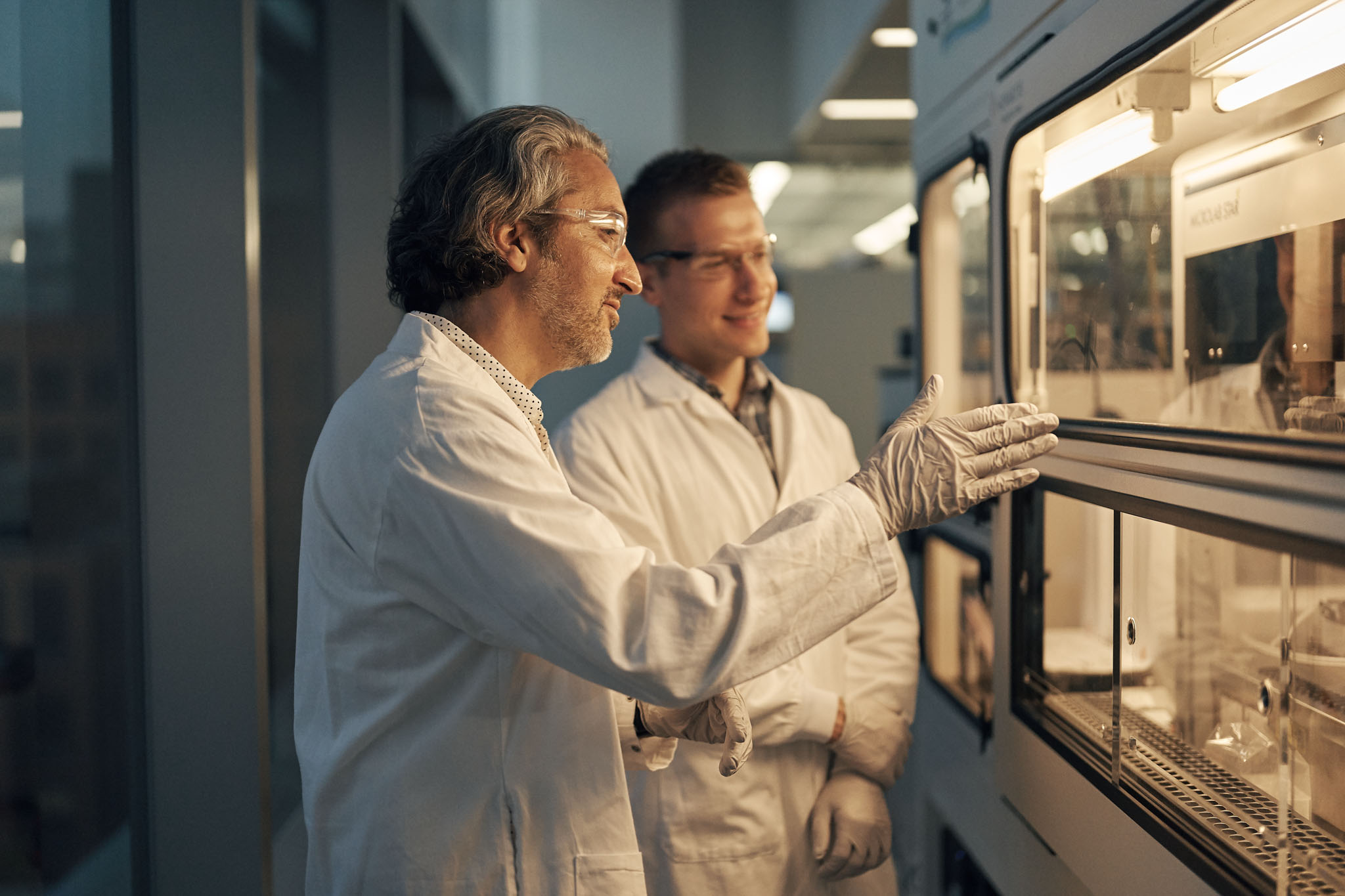 Above: Dr. Aj Kaykas and his former colleague at Novartis gaze into a CRISPR gene editing “neuron factory machine.”

Dr. Florencia Segal is a physician researcher specializing in infectious diseases. She came from humble beginnings in Venezuela—rising up to the critical work she is doing now, which includes implementing a Phase lll clinical trial on the effects hydrocycholroquine has on COVID-19 patients. Even through the demand of her clinical trials, Dr. Florencia continues to volunteer at Brigham and Women's Hospital once a week to see her past patients she has grown close to over the years. She told me that lab work for infectious diseases can be somewhat data-driven and dehumanizing, so she volunteers on the ground to better understand what matters for her patients. She bridges the gap between science and bedside manner to remind herself not just what the work is for, but more importantly; who it is helping. She is humanizing the suffering of others so she can remain truly motivated. When she described this, I thought of the young nurse Josephine in Rwanda, who had abandoned the dream of a cosmopolitan life in a Kigali facility to be among her people in an extremely remote environment where she was needed most. 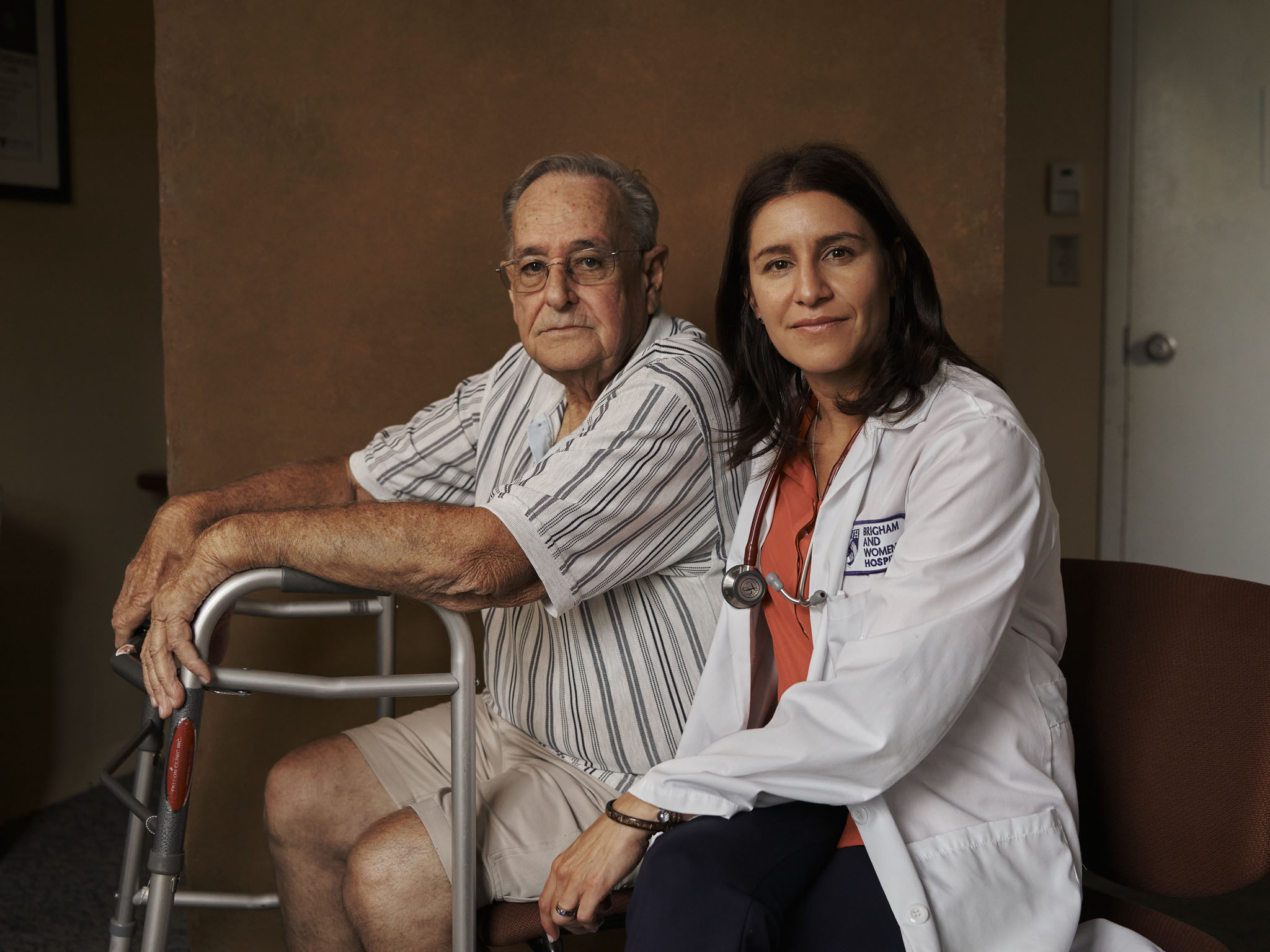 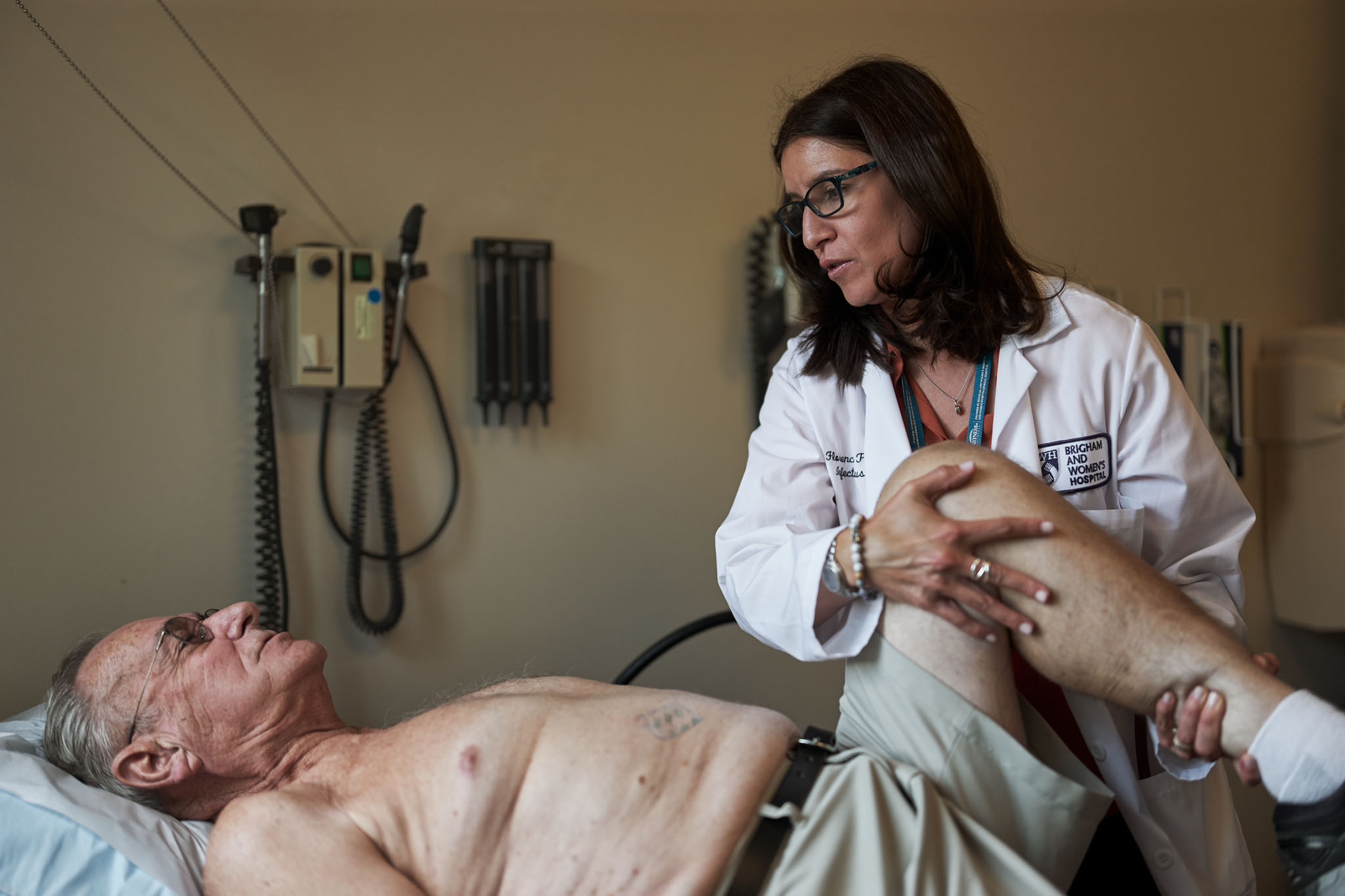 Above: Dr. Florencia Segal, a physician­ researcher at Novartis in Cambridge, Massachusetts, consults with patient James Mulcahy at Brigham and Women’s Hospital in Boston, where she volunteers one day a week.

As a portrait photographer, I remind myself every day of the power of the face-to-face connection. These doctors I photographed seemed to hold that connection in mind in regards to their own work— and how it effects the real people they treat everyday in their care. In every nation I photographed, what these healthcare professionals all had in common was the need to find the human thread in a world of disease and data. 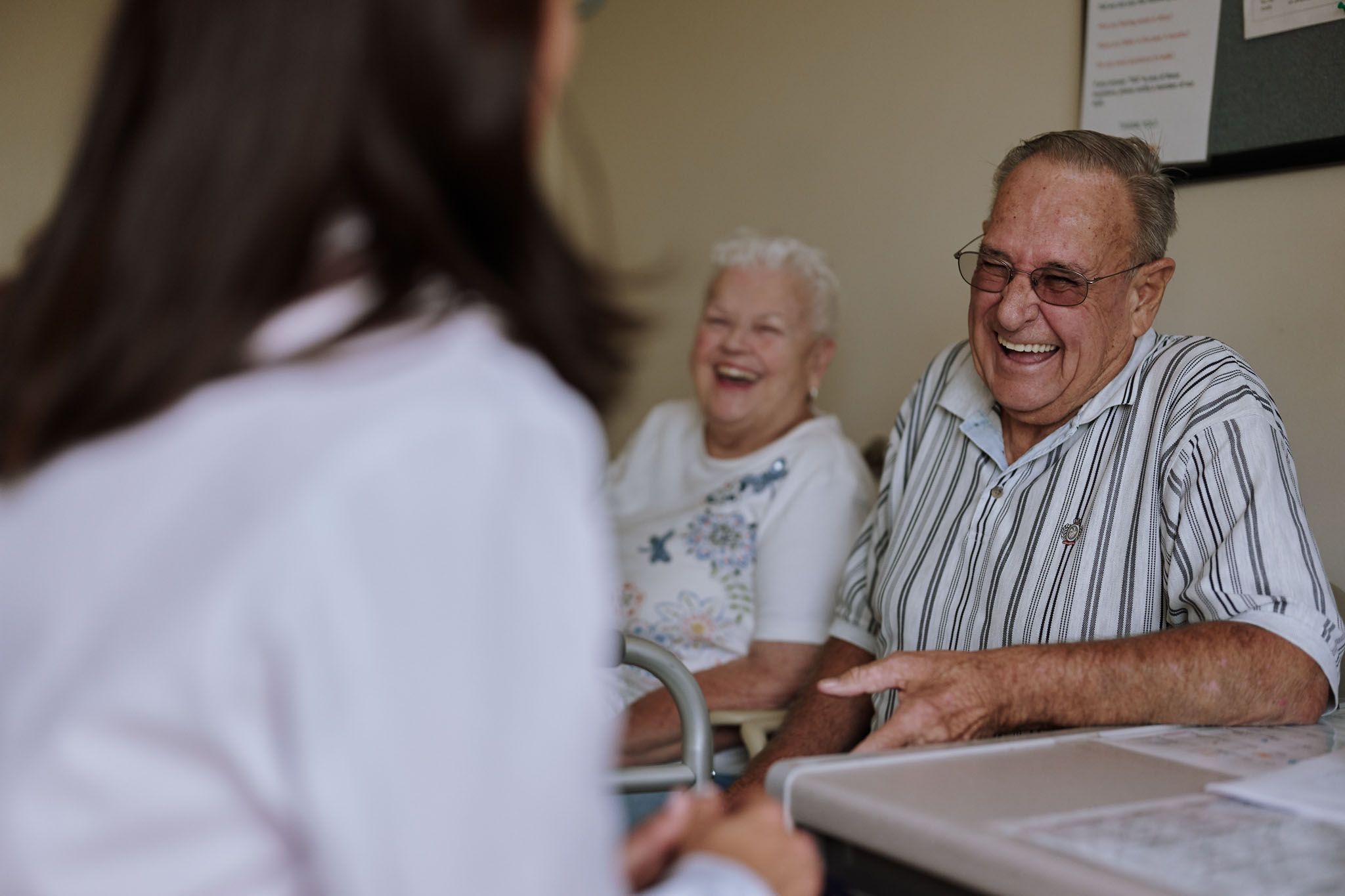 This project would not have been possible without the help of:​​​​​​​