This is part two of my project for Novartis Annual Report photographed in seven nations around the world. Part one can be read here. 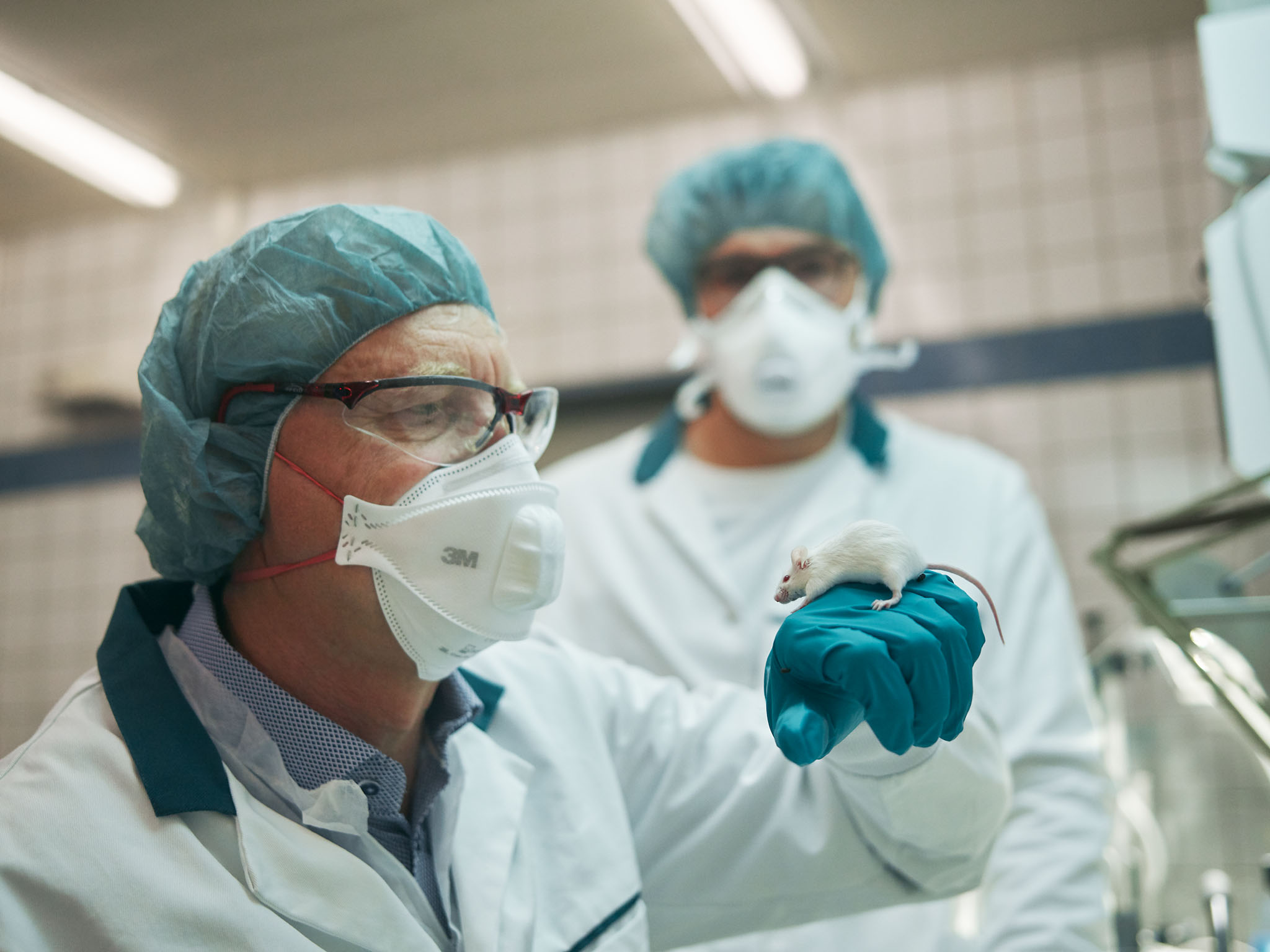 BASEL, SWITZERLAND: I lift my camera to my face, the smell of rubbing alcohol stings my eyelid, and fills my nostrils. We had tediously rubbed every piece of my photography equipment down, and slipped into the quarantined laboratory via a sealed elevator. Through my plastic safety goggles, through the peep hole of my viewfinder, a lab mouse was visible with a cancerous lump beneath its hide of white fur.

Now, it was the task of a team of ingenious scientists to shrink the tumor, to eviscerate the overgrowth of cells, to cure the cancer. The team had innovated ways to reduce stress on lab mice, dramatically reducing the amount of animals used in half over the decades. It was extremely rare for a pharmaceutical company to openly show their animal testing. They were confident enough of the newly improved methods to allow someone like me to photograph it. The team injected a bioluminescent fluid into the mouse which could be read by a special camera. The scans could then track which cancer treatment worked best, which combination shrank the lump most effectively. No need to put it through unnecessary pain. I had been sent to Basel to photograph the team behind all this— Dr. Schnell and his innovative colleagues. 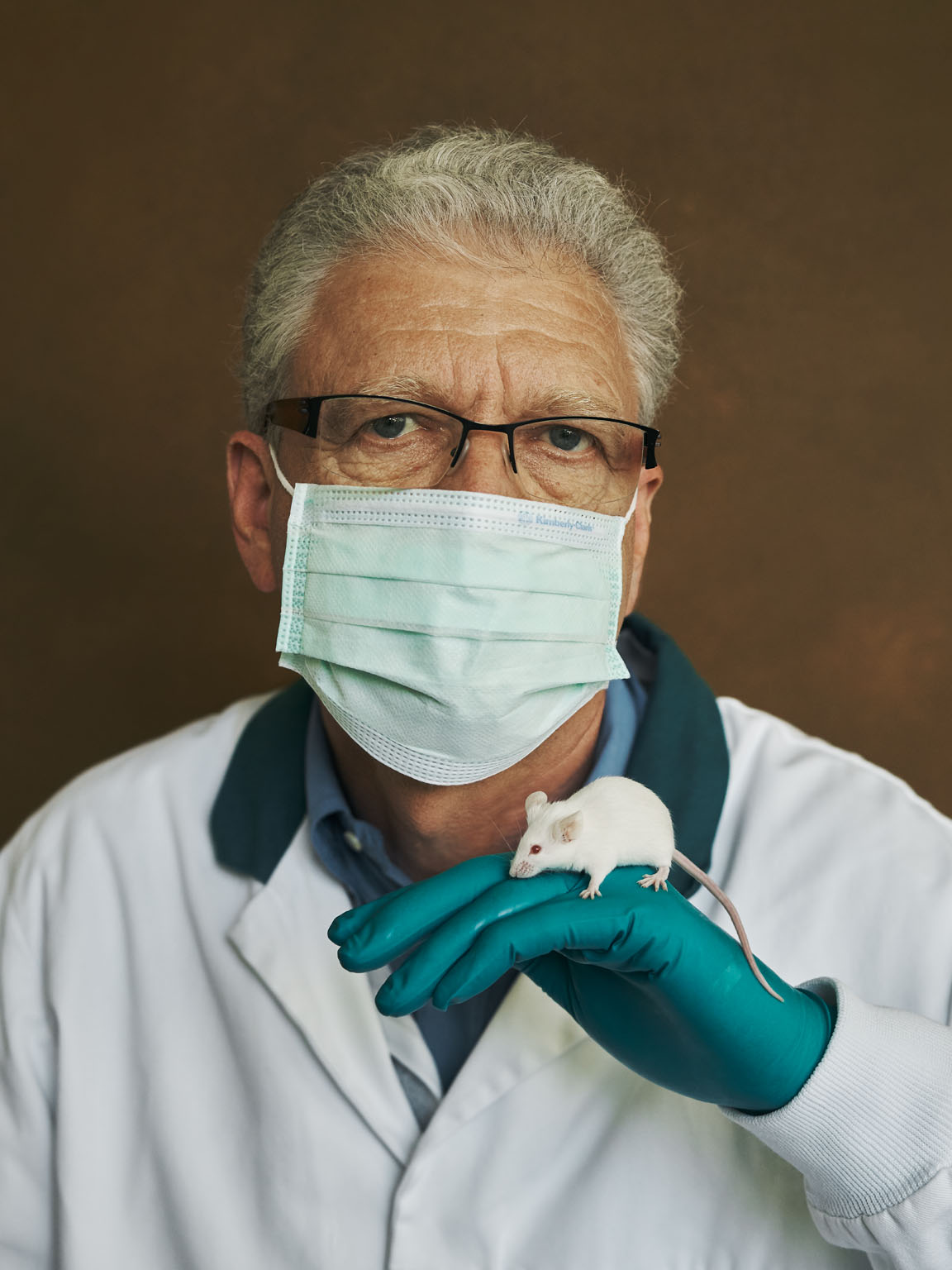 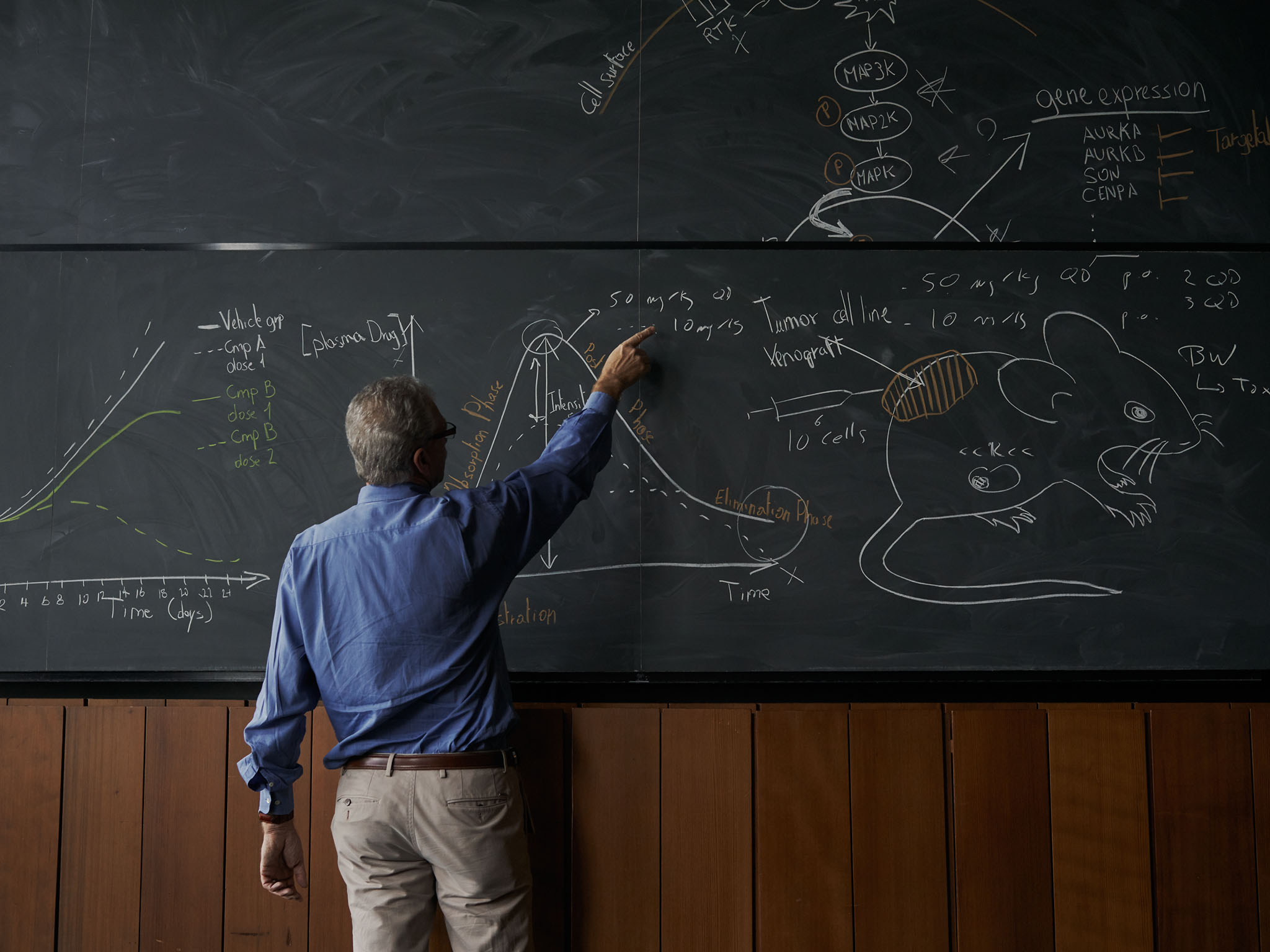 From my rolling stool in the lab, I found myself agreeing with the methods of the charismatic doctor Dr. Schnell. I knew that if my father or mother fell ill with cancer, I would seek out any kind of treatment that existed. The combination of each experimental molecule was well documented, shared externally, and likely not repeated in the same sequence. In that way, every experiment that resulted in failure was also one step closer to a cure.

​​​​​​​Days before our shoot, Dr. Schnell and his young colleague Dr. Ebel had met me in the laboratory parking lot with great enthusiasm. After beers by the Rhine River, Dr. Schnell became Christian, and Dr. Ebel became Nicolas. Christian and Nicolas were not the scientists of horror movies, pulling a large switch during a lightening storm to bring life to their Frankenstein. No, they seemed more like artists. I discovered that science isn’t a world of clean-cut mathematics, but rather every experiment was more like a creative stab in the dark. 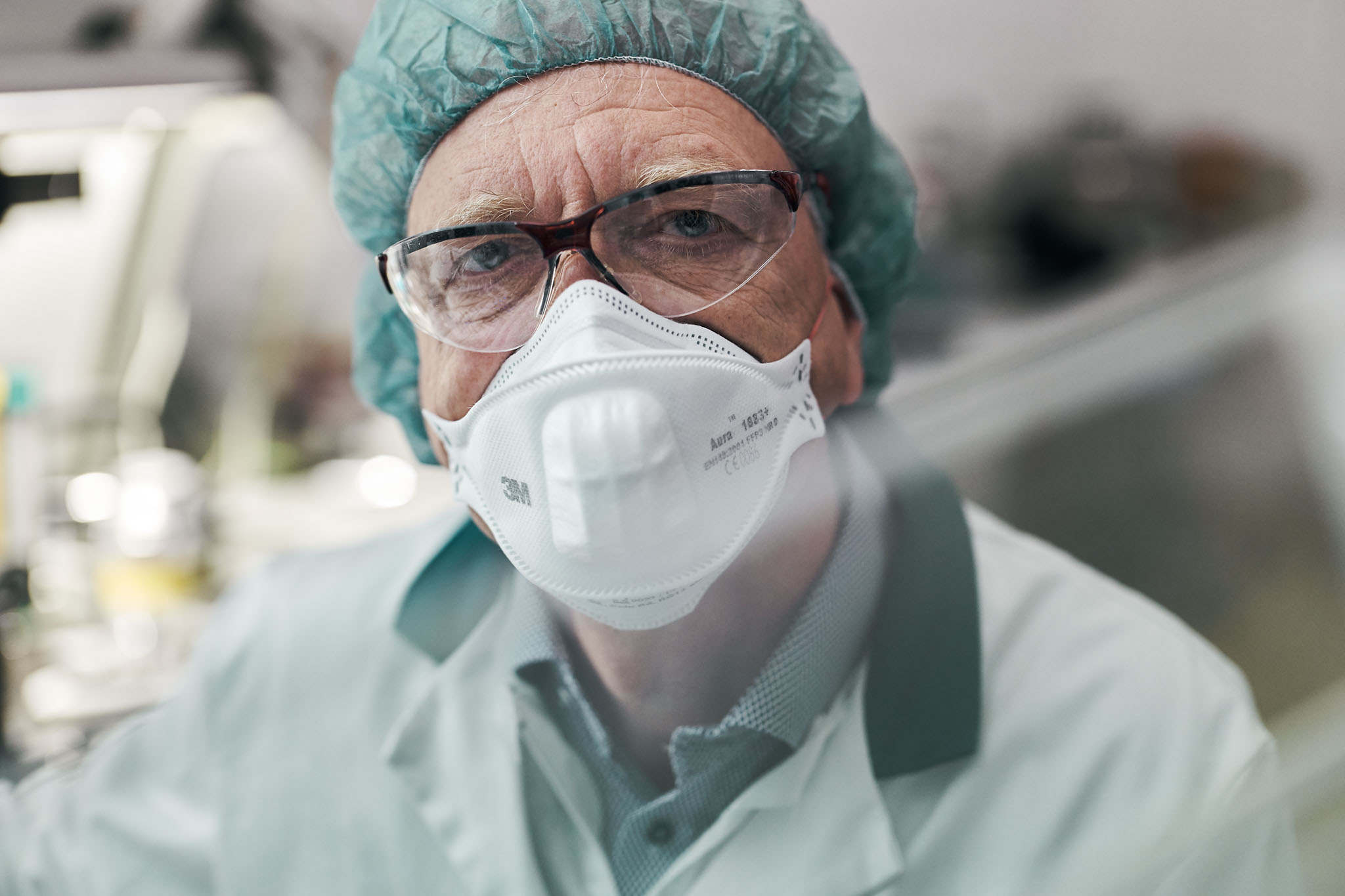 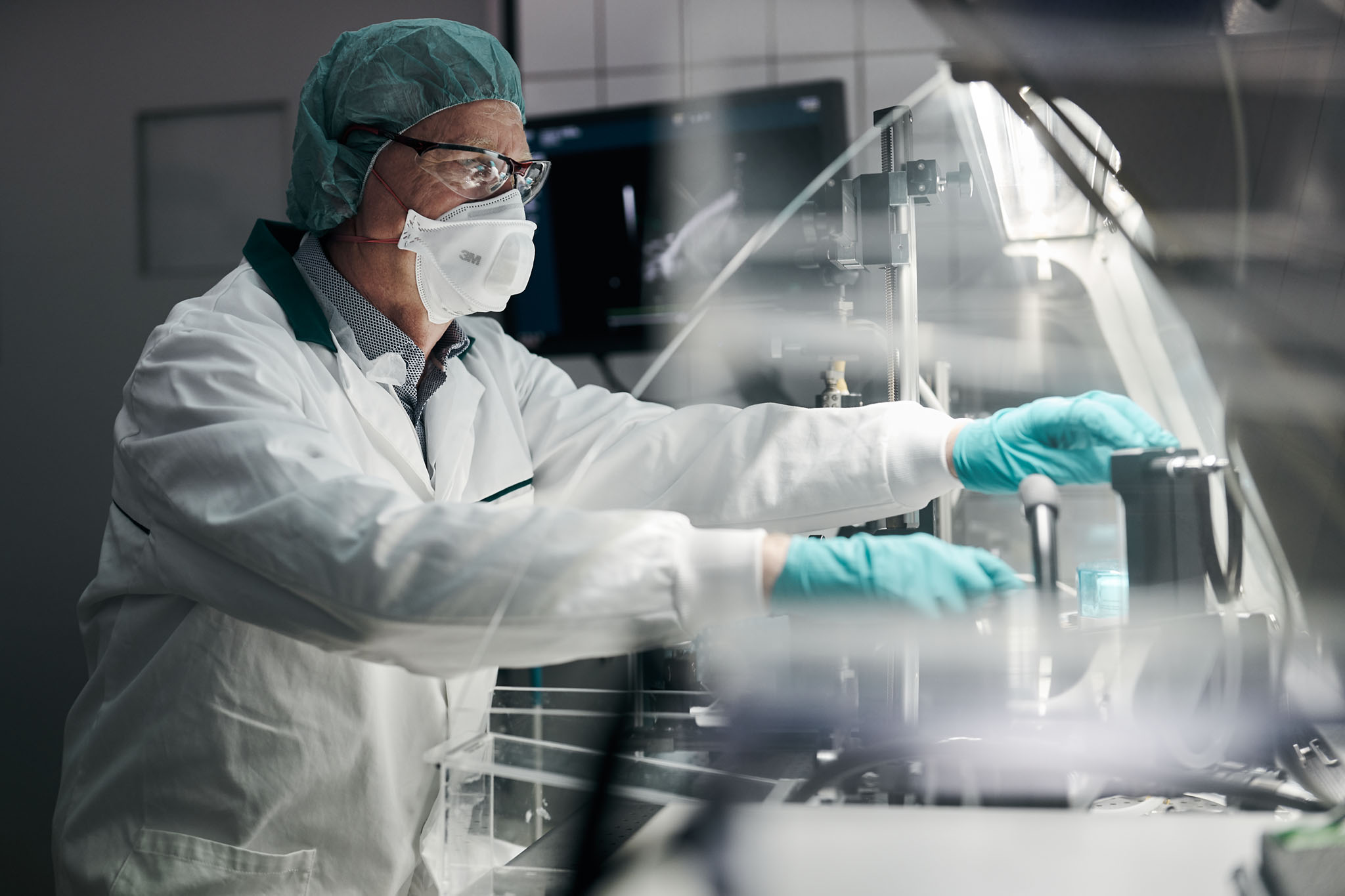 The mouse scurried around the windowless room of the lab.The white of the mouse against the white of the lab made the autofocus mechanism of my medium format camera stutter uncontrollably. A gigantic hand in blue gloves picked up the mouse, and slid it inside a plastic tube. The door of Christian’s bioluminescent camera was closed, and the scanning began. After a few moments, scans appeared on Christian’s computer screen with vibrant colors highlighting cancerous cells. The mouse was released from the camera system.

​​​​​​​Whatever mischievous gods or overlords ran this simulation of our planet Earth, they were surely having a laugh at us human beings. They hid the secrets of the universe inside this mouse. Just as they hid rapamycin in the bacteria living in the soil of Easter Island, adding to treatments which dramatically reduced rejection in organ transplants. Just as they hid wormwood in the rainforests under control of the Viet Cong and North Vietnames fighters, which would one day provide the active ingredient for an effective malaria treatment after the war was over. This system all seemed unnecessary and confusing, yet still was the operating system the world ran on. Plugged into the program was Christian and his young colleague Nicolas, seeking a life in a lab that could give them the tools they needed to work and fund their most radical scientific ideas.

SLOVENIA: Weeks later for the same assignment, found myself photographing Milena Remic— leukemia survivor, outspoken activist against blood cancer and vice president of the Slovenian Association of Patients with Lymphoma and Leukemia. It became Milena’s life mission to council and support others dealing with the horrors she had beaten. 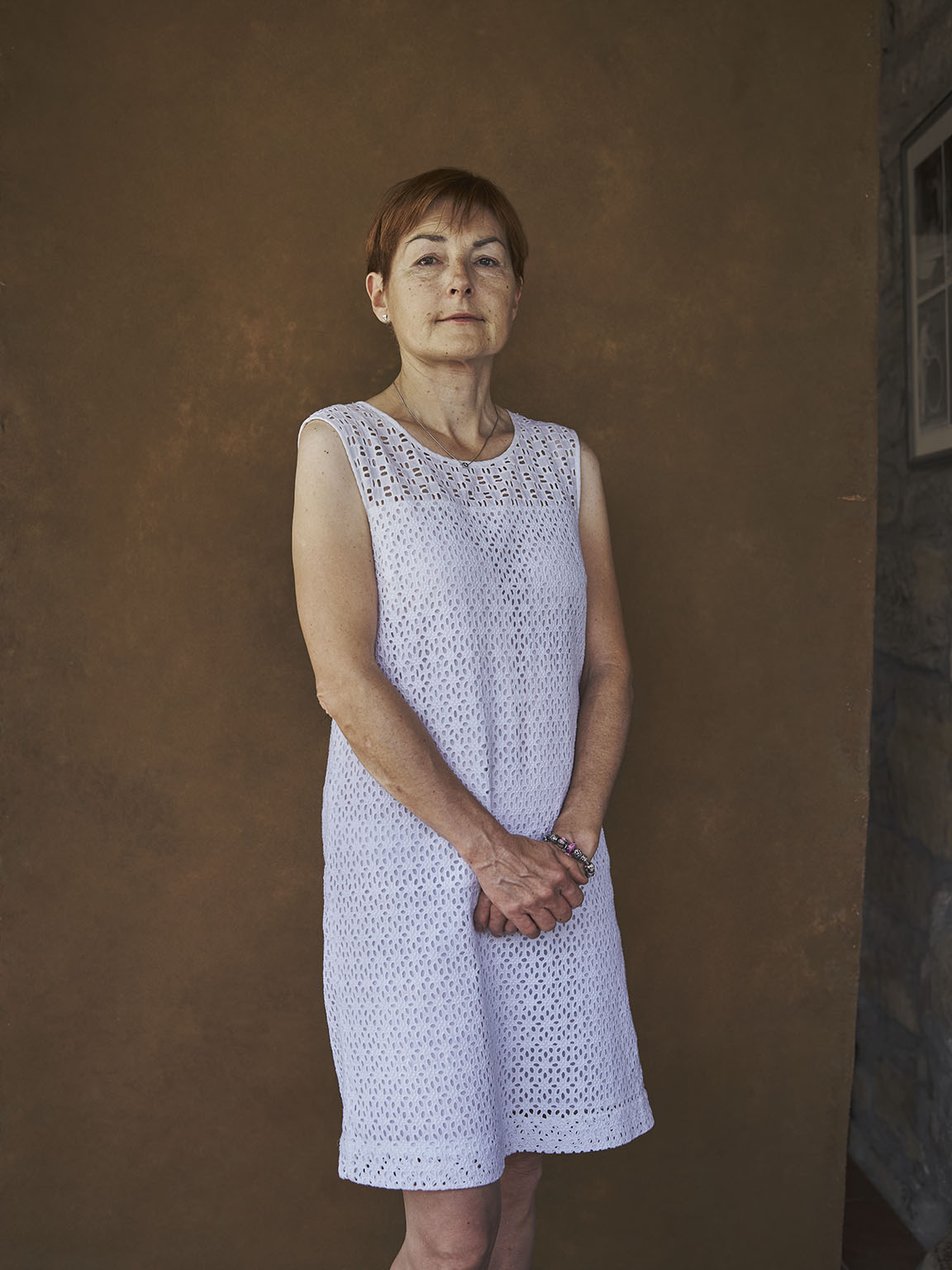 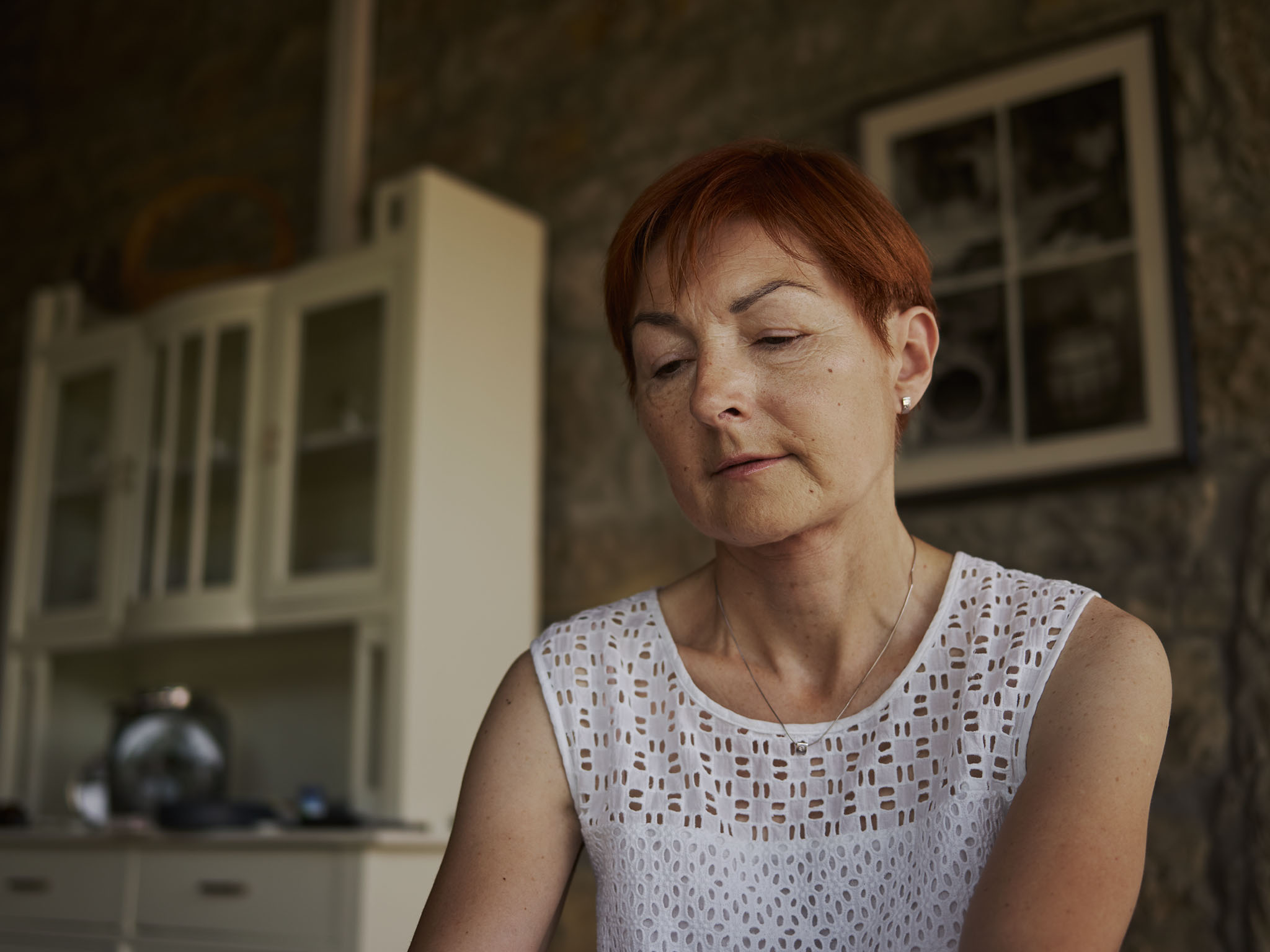 Milena recovered with her own willpower, but also with the help of a stranger’s bone marrow. Now the stranger had a familiar name- Thomas. It is not common for donors to meet their recipient, but both Milena and Thomas wrote anonymous letters to each other via their clinic, and eventually decided to meet. Milena affectionately calls Thomas her “bloodbrother”. Linked deep down by the same marrow, an unlikely friendship grew.

I photographed Milena and Thomas exploring the ruins of historical villages in the countryside of both Slovenia and near Thomas’ vacation home in Croatia. In the historic town of Draguć, a bead of sweat rolled down Thomas’ face as he glanced up at at the painted fresco ceilings in the 16th century church of St. Rocco. Milena seemed to have a kind of angelic glow from just the few faint light sources bouncing off the white surface of her dress.

Saint Roch, who had triumphed over the plague was depicted proudly displaying his wounds and swollen lymph nodes openly. A symbol of victory over a disease living inside his bloodstream, and proof a mortal could survive the plague. 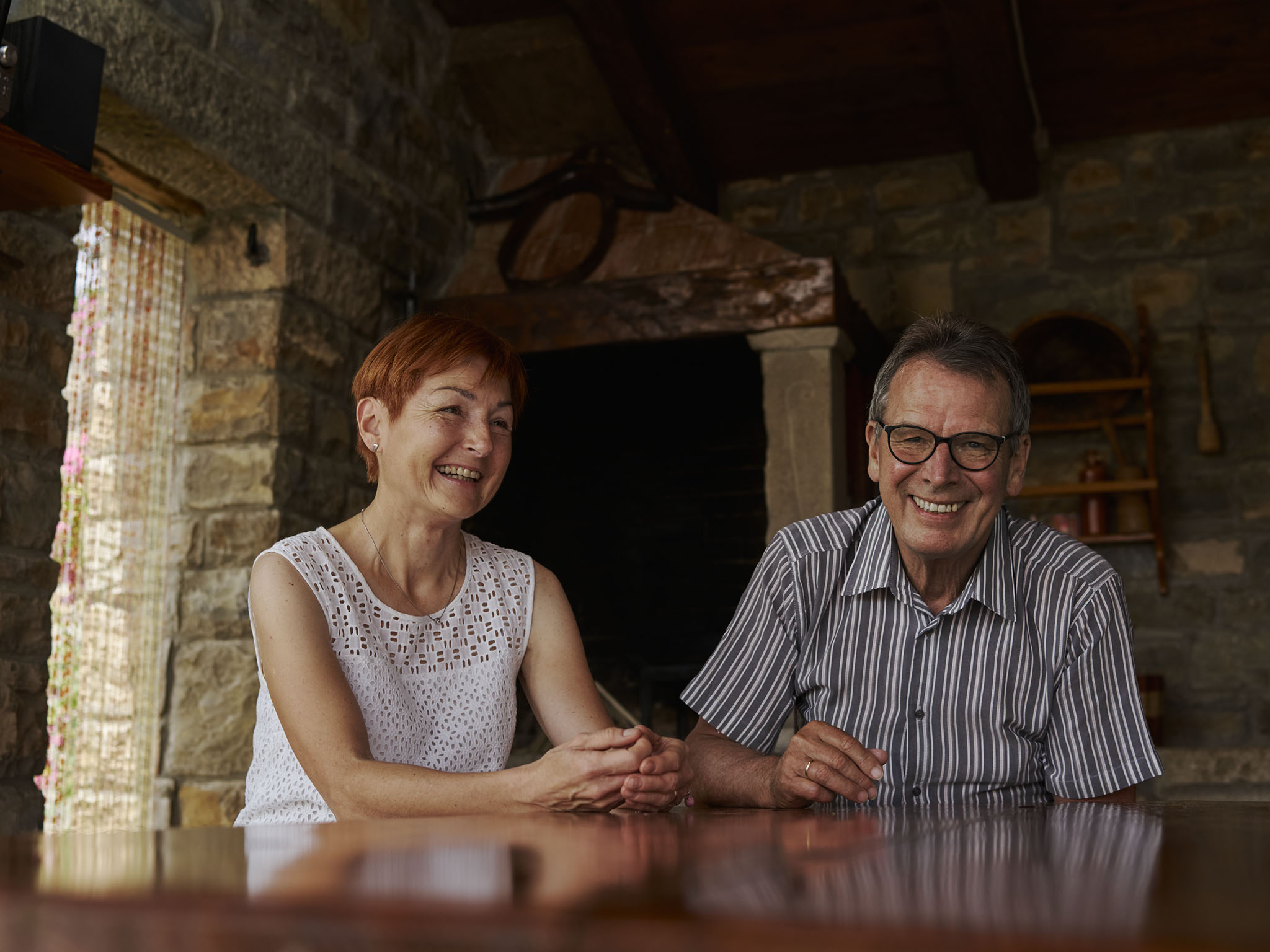 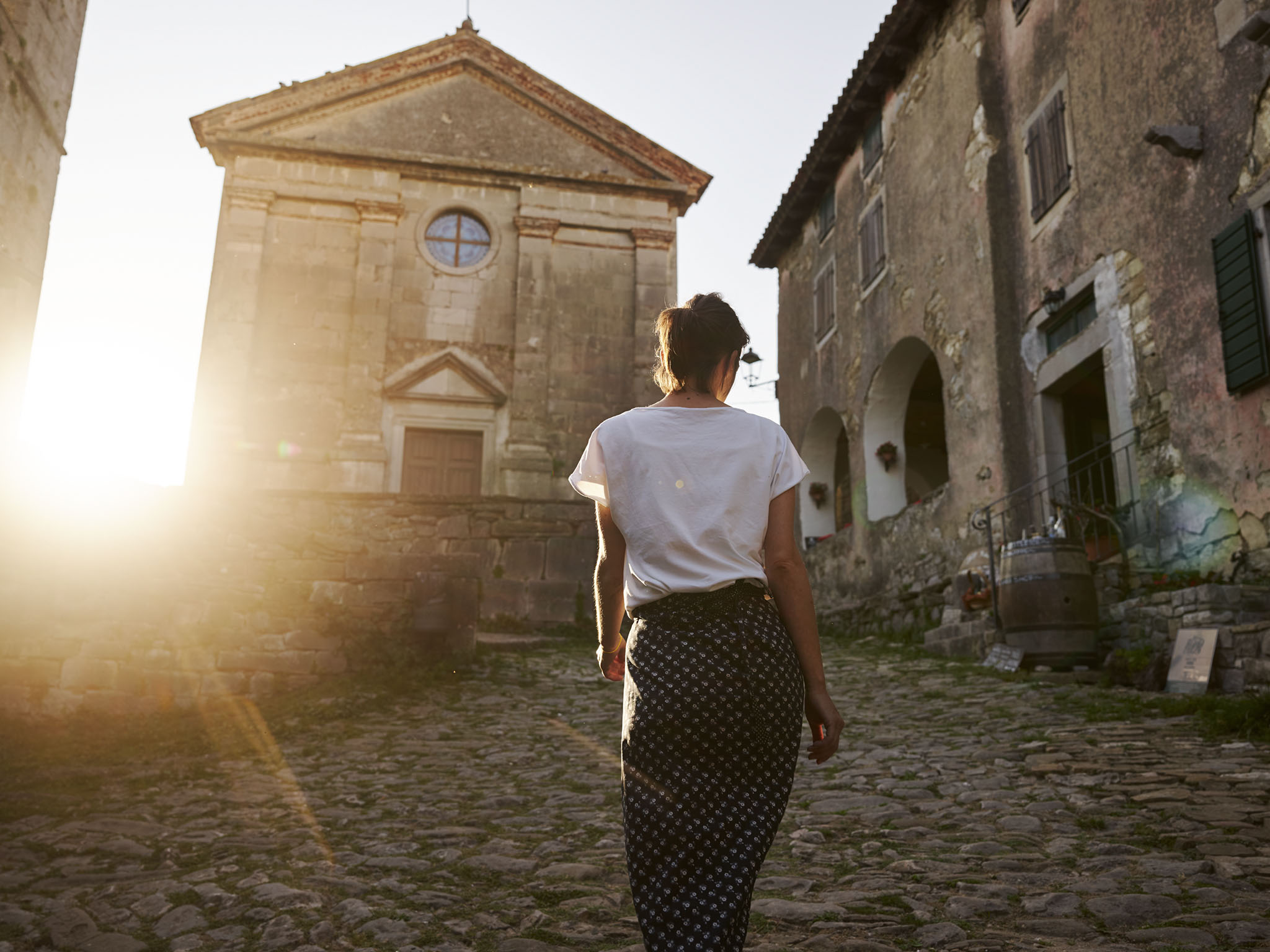 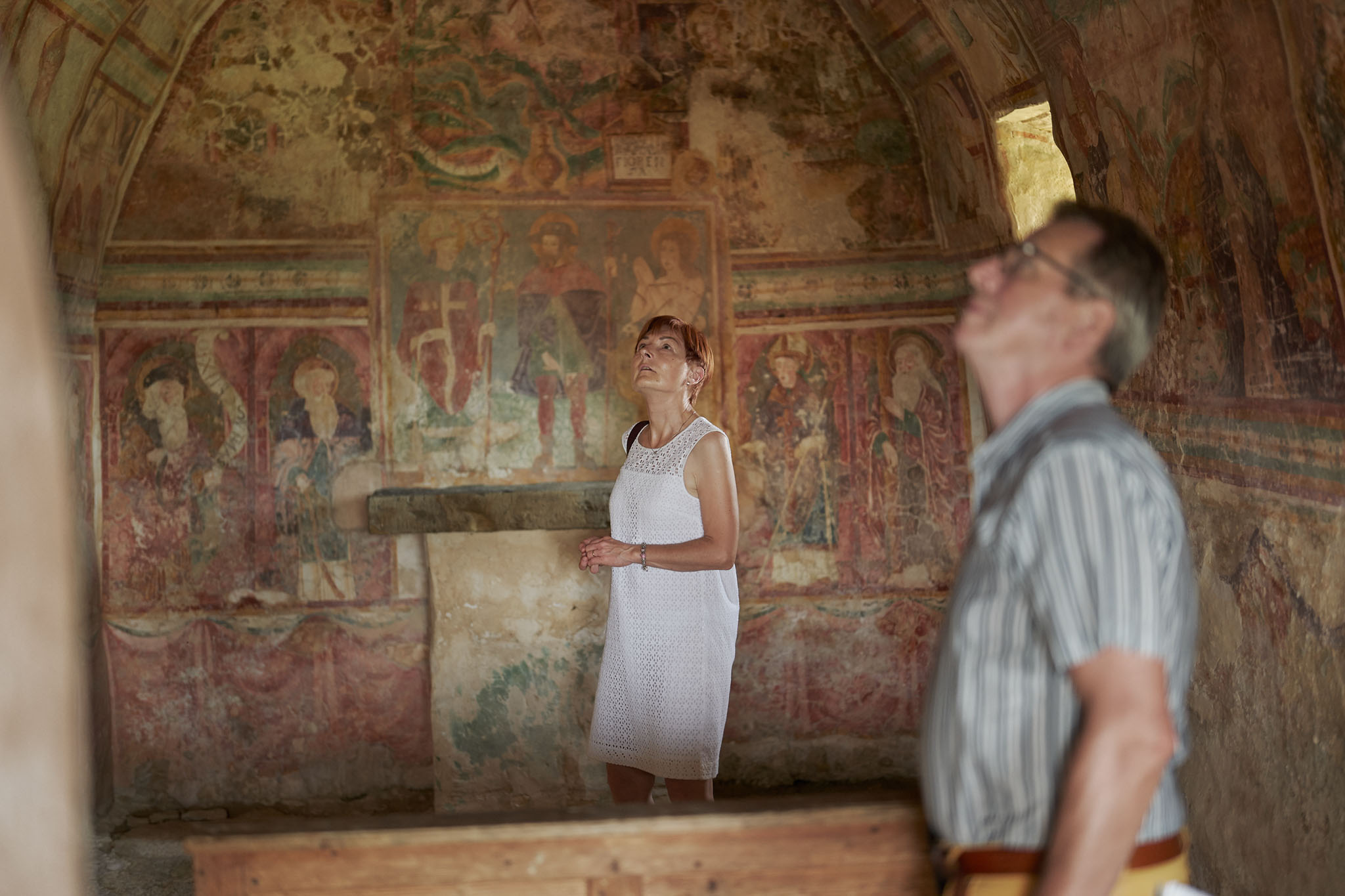 Sweating from the heat inside the cavernous structure, I took my jean jacket off. Milena noticed the tattoos spread across my arms. “The tattoos, they can’t ever come off? I mean, is it permanent?” She asked.

“Nothing is permanent,” I smiled. Then I regretted saying that, not thinking very wisely of my own words. I was worried I had said something too dramatic considering Milena’s past as a leukemia survivor. I was telling her what she already knew. Milena wasn’t easily offended. Instead, she nodded her head slowly. “Yes, you’re absolutely right about that.”

Over the next week in Slovenia, I grew close with Milena in the way that a photographer can be invited into someone’s life. The way you can sit in a room with complete strangers, observing everything they do, yet it’s somehow not weird at all. I watched Milena council and give emotional support to both the elderly and young, both age categories seeming too full of energy and life to act the way I thought people with cancer were supposed to behave. But that was Milena’s magic. She put them at such ease that they eventually forgot about the photographer in the room. The Slovenian language also protected them, masking any details from the foreign photographer who could only understand the universal language of hushed voices and prolonged eye contact. 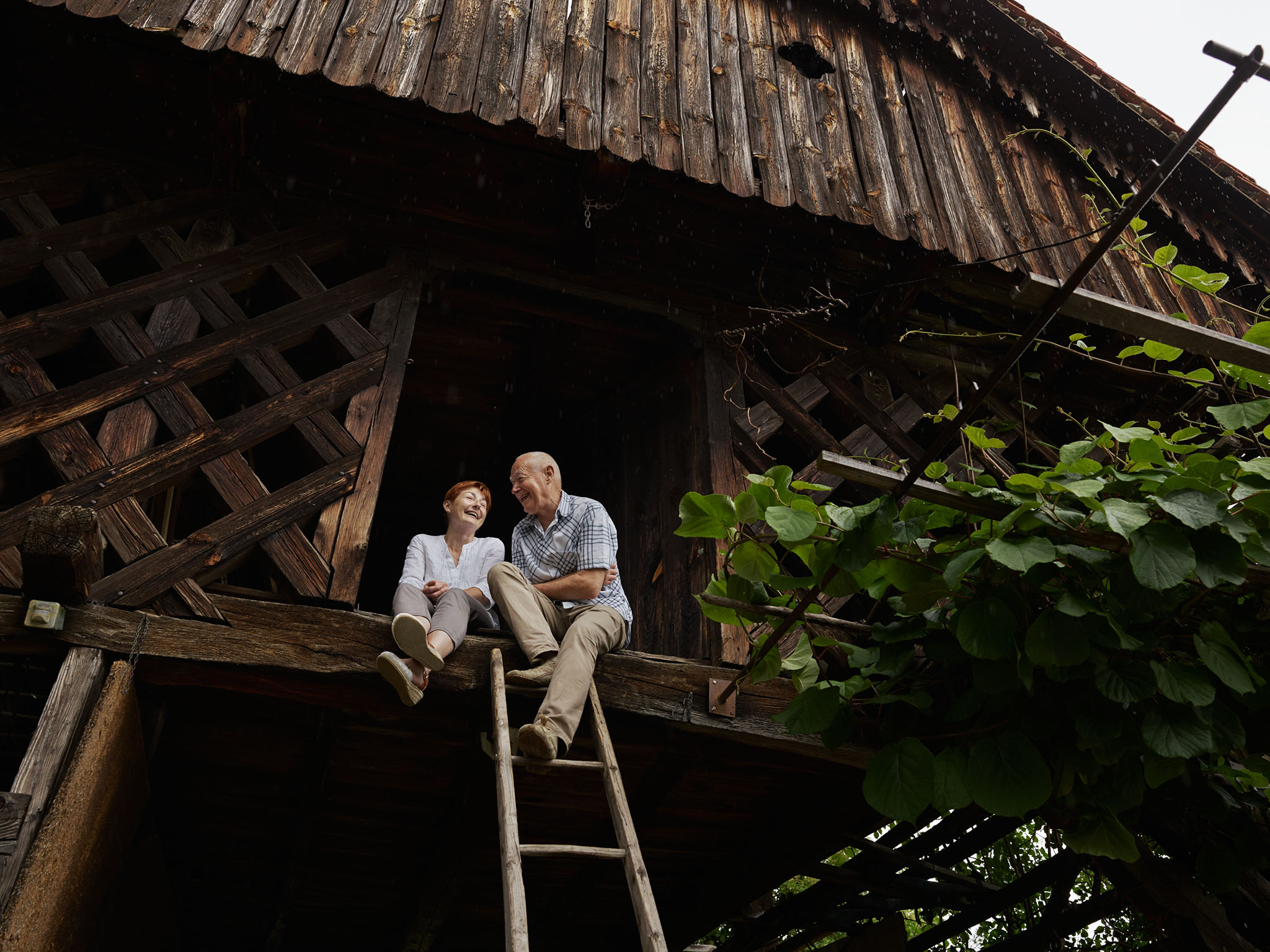 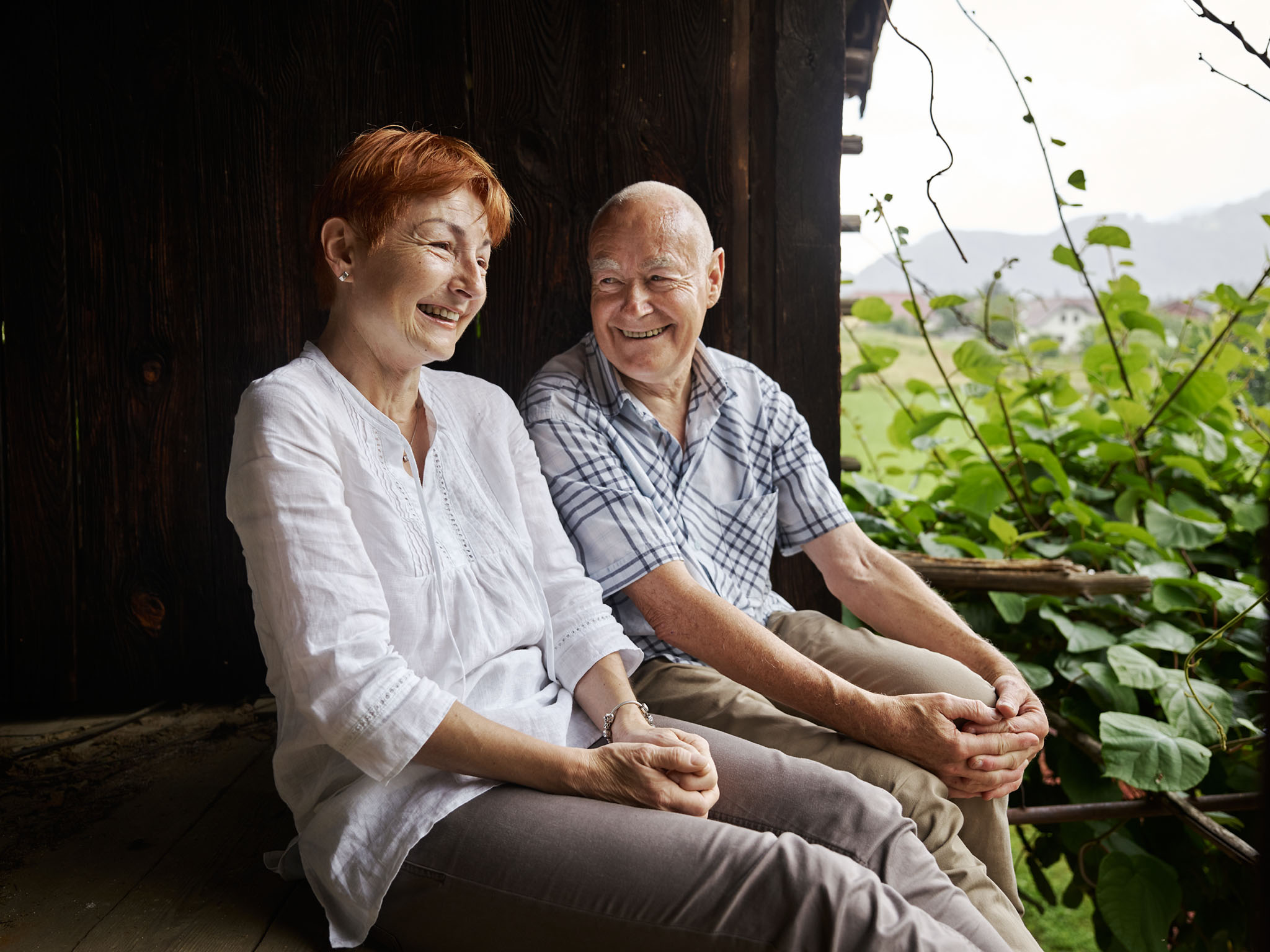 Above: Milena visits the home of Ivan, a patient of hers battling his leukemia. Ivan is quick to show us an interesting historical structure beside his home— a traditional Slovenian dwelling primarily used for craftsmanship tools and equipment storage. Milena warns Ivan to climb the ladder slowly, as he could faint midway from his condition. Ivan laughs and continues upward with a childlike curiosity. 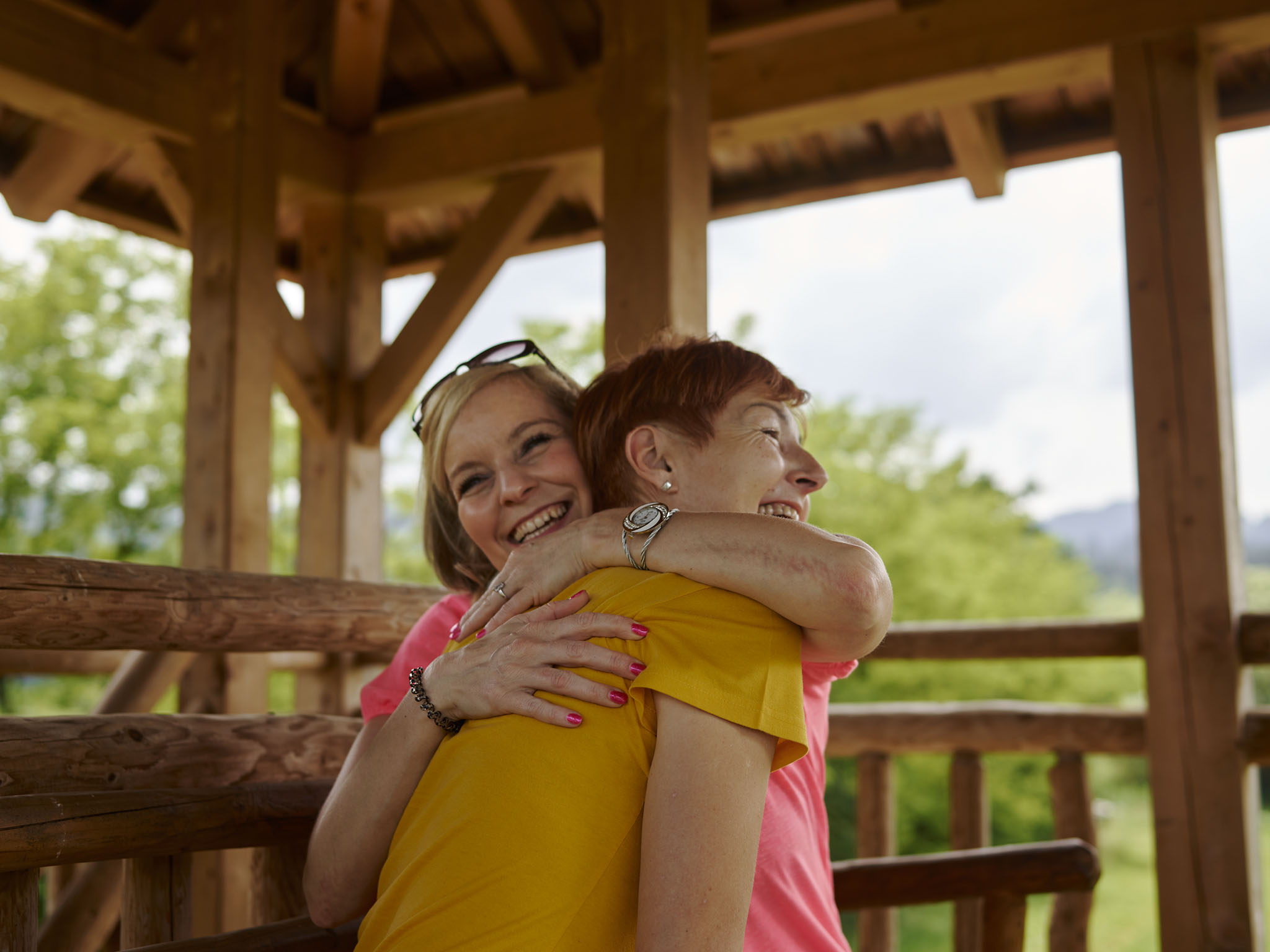 Above: At the time of photographing, Andreja was newly diagnosed leukemia and was waiting for her bone marrow donor. She contacted Milena to receive emotional support and advice. After keeping in close contact over the phone, I photographed Milena meet Andreja in person for the first time. “How could the world be so cruel to such a beauty?” Milena asked herself out loud. Then, she remains confident and continued, “We should be ready for anything." Unfortunately, Andreja would succumb to the cancer and pass away despite a long, tough fight.

Above: Milena welcomes locals from the town of Prevalje at a community center located in the fire station. It is the day of an “Enroll Yourself” bone marrow donor event. Eligible candidates will enroll as potential donors in the registry of hematopoietic stem cells donors. After paperwork is signed, locals use cheek swabs to capture their stem cells. This genetic information will be stored in a searchable database. Milena’s motivational speeches and personal stories help keep the mood personal and uplifting. 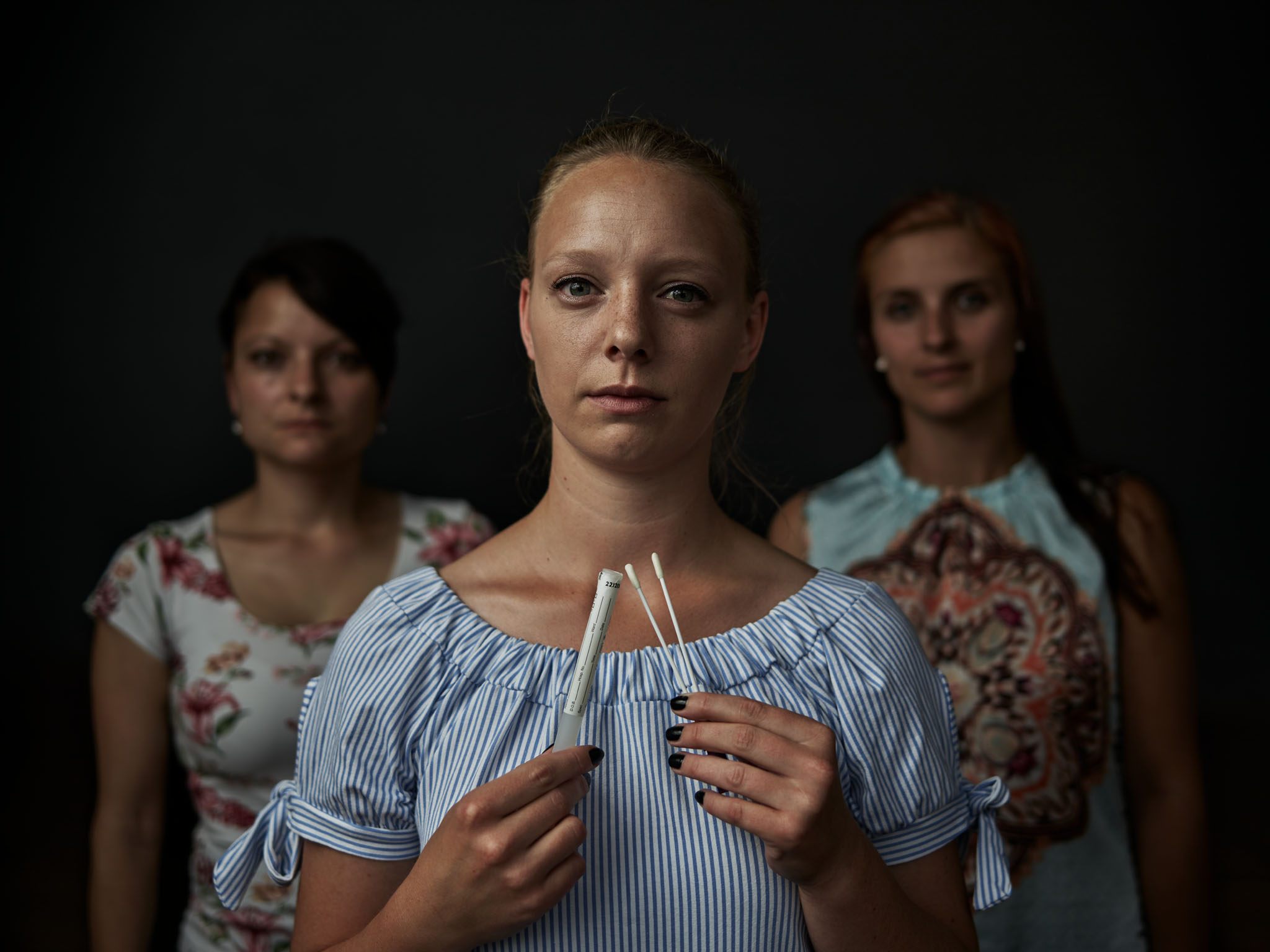 On another day. Milena explained to me one of her favorite hobbies was mountain climbing. I suggested we do it together with my camera to show the world her strength, and that she had defeated blood cancer. When we reached a plateau of Mount Vršič, I photographed her looking triumphantly across the vista. However it was a simple iPhone image that ended up meaning more. Taking a break on top of the mountain, my phone buzzed inside my pocket. It was Dr. Nicolas Ebel from Basel, inquiring how the rest of my shoot was going in Slovenia.

​​​​​​​“This is our subject Milena, the leukemia survivor,” I wrote him, sending a winded selfie of us on top of the mountain.

Nicolas’ reply back was simple, but ended up searing an impression in my mind that I will never forget. “Greetings from the other side of the pipeline. Happy to see what I’m working for.” And then another message followed right after. “This is why I go to work, to the lab.”

Somehow it all seemed connected. The illness and the cure. The blood cancer of Milena, the bone marrow of Thomas. Nicolas and Dr. Schnell laboring together with their team in a windowless room. For that short moment, I saw the system for what it was.

I would like to thank the following people for helping this project come together:

In memory of Andreja Mori